“There are so many things that we take for granted when life is on the go,” Faouzia says to HollywoodLife when explaining the inspiration behind her new song. Though it wasn’t written about the current time of coronavirus, “Wake Me When It’s Over” inadvertently captured the mood. When she sings, “Now that I’m living without you / so much I’m missing about you,” she’s addressing the other half of a heartbreak. Still, it doesn’t take much to see how these lyrics will resonate with anyone feeling the weight of isolation and quarantine setting in. It’s a synchronicity that Fauzia recognizes.

“Now, with everything happening in the world, I’ve had a lot of time to take a step back and think,” she tells HollywoodLife “‘Wake Me When It’s Over’ is about how my thoughts can sometimes take control, but also help me appreciate small things until the difficult times pass.”

Those difficult times will pass by easier, thanks to Faouzia’s new song. Co-written with Mozella – who worked with the likes of Miley Cyrus and Kelly Clarkson in the past – “Wake Me When It’s Over” is a stunning accomplishment, one that depicts a person at their most vulnerable, delivered by a woman whose vocal strength is undeniable. For those going through their own long, dark night, “Wake Me It’s Over” is a shining light that signals that dawn is coming.

With its powerful-yet-restrained production, where Faouzia’s voice never leaves the spotlight, “Wake Me When It’s Over” could easily be performed in front of a symphonic orchestra. But, in the right hands, Faouzia’s stunning vocals could soar above a thumping beat, and “Wake Me When It’s Over” could be the track we all hear at clubs and festivals, once social-distancing protocols have been lifted. When asked who she’d love to see take the track out for a spin, she picked Ariana Grande. “I think Ariana Grande’s voice on this song would sound amazing. Her voice has so much power, but I feel like she’d add a soft touch to it that would be so beautiful.” 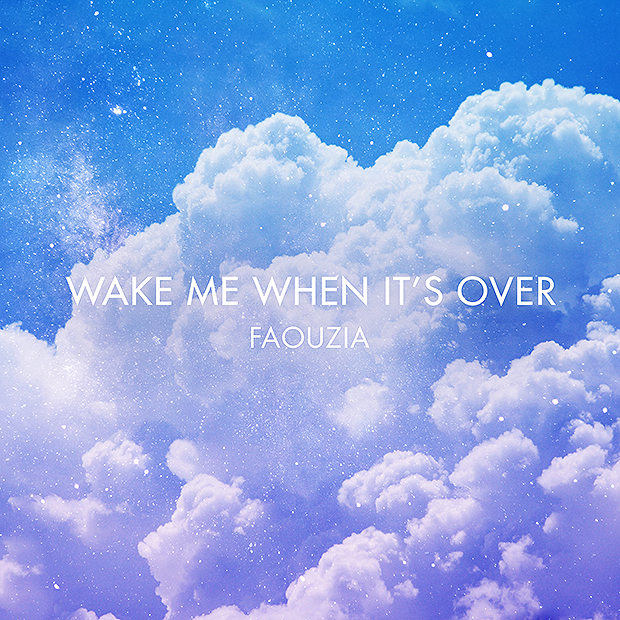 “Wake Me When It’s Over” marks Faouzia’s second single of 202. She previously released “The Road” in January. An ode to all those “bittersweet moments that make you realize you need to move on,” according to the singer, “The Road” saw her capitalize on the momentum she built over 2019 after releasing a handful of powerful tracks including “You Don’t Even Know Me” and “Tears of Gold.”

Born in Morocco and raised in Manitoba, Faouzia has blended the best of both worlds, mixing her Moroccan heritage with her lifelong love of pop music to create a sound like no other. The multi-instrumentalist began playing piano at age six and soon added violin and guitar to her audio arsenal. After winning several local and national singing competitions, she earned top prize honors both the Nashville-based Unsigned Only and International Songwriting Competition. She blew up in 2018 after she teamed up with David Guetta’s smash hit “Battle,” and her star continues to rise.