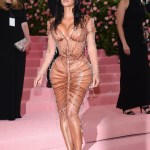 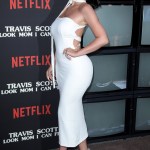 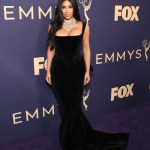 Kim Kardashian virtually appeared on The Tonight Show Starring Jimmy Fallon on March 30, and she dished all about her fight with Kourtney Kardashian on the season 18 premiere of Keeping Up With the Kardashians. During the fight, Kim charged at Kourtney and slapped her multiple times, and she explained to Jimmy Fallon why she felt the urge to get so physical, even though she doesn’t like to be violent like that. “I don’t really ever resort to violence like that, but she scratched me so hard, which you guys didn’t see,” Kim revealed. “I was bleeding.”

She added that slapping Kourtney wasn’t her “proudest moment,” and that production on KUWTK shut down for a week after the incident. “I think everyone was really shook for a minute,” she admitted. “This isn’t our type of show. We want everyone to be comfortable and safe.” Kim also revealed that her mom, Kris Jenner, was brought to tears when she saw the footage of her two oldest daughters fighting so intensely. “She was like…who are you guys?” Kim said. “What is going on?”

The fight stemmed from weeks of tension between Kourtney and Kim/Khloe Kardashian. It began during the show’s 17th season, when Kourtney didn’t want to film aspects of her personal life for the show, which pissed Kim and Khloe off. At the end of the season, Kourtney was up in the air about whether or not she’d return, but after a month off, she decided to come back.

However, during the season 18 premiere, Kim and Khloe noticed that their sister’s attitude hadn’t improved. “[Kourtney]’s not the type of person who will made a decision and decide, okay, I’m not going to film anymore,” Kim explained. “But she would come to work with an attitude every day and kind of take it out on everyone, from the crew to us. So we were kind of pushing her to figure out why she was so unhappy.” Things escalated from there, which led to the fight.

As the episode aired on March 26, Kourtney revealed on Twitter that she now has quit the show, which Kim confirmed to Jimmy. “She’s made the decision to take time off now,” Kim said. “And I think she really needs it.” We’ll see the aftermath of the sisters’ battle during the next episode of KUWTK on April 2 at 8:00 p.m. on E!