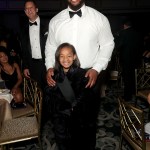 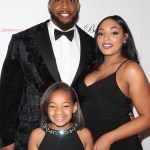 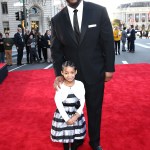 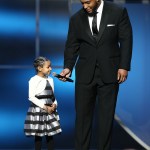 For over a year, fans prayed for little Leah Still as she fought stage 4 neuroblastoma. Her dad, Devon Still, tirelessly cared for her despite his football career. Now, they can celebrate a very happy milestone!

In 2014, Leah Still’s odds of living were only 50-50 after being diagnosed with stage 4 neuroblastoma. Fast forward to 2020, and the nine year old is celebrating her fifth cancer-free anniversary by the side of her dad Devon Still, 30, who had been his daughter’s rock throughout her once uncertain road to recovery. This year’s celebration was a bit different, given California’s stay-at-home order amid the coronavirus outbreak — so Devon improvised. The retired NFL player “put on” his chef hat and delivered a Michelin star-worthy meal for little Leah! He filmed her adorable reaction for an Instagram video shared on March 26.

Devon’s daughter smiled wide at the dinner table as her loving dad panned out to the gourmet courses he prepared: juicy steak, grilled asparagus, and lobster mac and cheese! “When your daughter wants to go out to the steakhouse to celebrate, but we locked down on quarantine. You know you just got to whip out that chef hat,” Devon said in the video, much to his daughter’s amusement. Devon proudly added, “Yeah, this is better than any steakhouse!”

This was the most important anniversary yet. “Once your child reaches the five-year mark in their cancer battle, the chances of the cancer coming back are basically slim to none,” Devon told TODAY on March 25. He could barely imagine throwing such a celebration after first learning the devastating news of Leah’s rare diagnosis in June of 2014, when she was only four years old. At stage 4, the cancer — which stems from early nerve cells — has “spread to distant sites such as distant lymph nodes, bone, liver, skin, bone marrow, or other organs,” according to the American Cancer Society.

Leah didn’t get to go to the steakhouse she wanted to to celebrate so I put on my chef hat and brought the steakhouse to her. #CancerFree #LeahStrong

“A day like this seemed so far away when we first got that diagnosis,” Devon told TODAY. “There’s been a lot of ups and downs along the journey and times you question if you’re ever gonna make it to this point, so it’s just a blessing.” Leah added that she was happy that there are “no more hospitals and needles” in her life!

Devon announced that his daughter was cancer-free in Dec. 2015. In 2017, he had another announcement: his retirement from the NFL! Alongside Leah, the former Cincinnati Bengals player continues to fight cancer nationwide with their Still Strong Foundation. Devon is also focused on being the devoting dad he’s always been — in addition to Leah, Devon is also raising his 7-month-old daughter Arya Marie with his wife, Asha Joyce, whom he married in 2016.