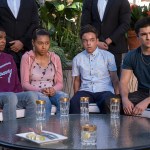 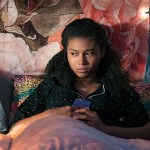 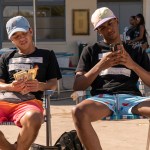 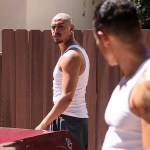 Monsar fans were left floored by the ‘On My Block’ season 3 finale. HL talked EXCLUSIVELY with Sierra Capri about the time jump, Monse’s love for Cesar, and Monse’s friendship with Jasmine.

Sierra Capri was just as surprised as the rest of us by the fates of the Core More — we have to include Jasmine and Spooky now! — when On My Block jumped ahead 2 years in the season 3 finale. However, she found the ending “realistic” and one she could relate to. “No matter how long you’ve known people, sometimes you do grow apart,” Sierra told HollywoodLife. “You either grow together or you grow apart. So I think that the way that it ended, I think it resonated with a lot of people because it happens. Hopefully, that doesn’t mean that it’s the end of the Core More, but we’ll see.”

She called the changes “a shockwave across the board because nobody expected us to drift so far apart from each other to end up doing so many different things because that’s how we all connected — through our environment and how we grew up and trials and tribulations and experiences that we had to go through. That’s how we all became friends and that’s how we all remained friends. I’m very interested to see what the future holds for everyone.”

The most shocking time jump reveal has to be Cesar. He’s now the head of the Santos, while Spooky has left the gang life and has a baby on the way. When Cesar turns around, he’s got a broken heart tattoo over his heart. Just before Monse left for boarding school, she had an emotional talk with Cesar. “When your heart beats, mine beats with it,” Cesar said. HollywoodLife asked Sierra whether or not she thinks Cesar’s broken heart tattoo is about Monse.

“Partially. I think the broken heart tattoo could mean a lot of things,” Sierra said. “It could be symbolic of a lot of things because Cesar’s gone through a lot. He’s experienced a lot for such a young kid — from family to relationships to friendships. I think everything has just done a 180 so maybe that was his way of processing it, but I definitely think Monse has something to do with the broken heart but also maybe his relationship with Spooky. Is it the same as it once was because Spooky has now changed his life around and now Cesar has actually become the new Spooky? It’s crazy.”

Since the beginning of their relationship, Monse has always tried to steer Cesar away from the gang life. Sierra admitted that she doesn’t think Monse would be too thrilled about Cesar’s transformation. “My personal opinion, I think she would be confused and a little disappointed and probably worried,” she said. “Above all, she still loves him and I think she will always love him no matter what happens, no matter where they end up. She will always worry about his safety and just want him to be okay. That sometimes gets her into a lot of tough situations that, again, she and the rest of the Core More end up having to get her out of.”

Monse and Cesar have broken up and gotten back together a number of times. No matter what, these two always find their way back to each other. Sierra isn’t ruling a reunion but thinks they need to group up. “I think that right now both of their main goals should be to focus on themselves and find out who they are and establish themselves as individuals before they try to come back into each other’s lives,” Sierra told HollywoodLife. “I think once Monse realizes what she actually wants and who she wants to be and who she is, I think that’s going to help a lot of issues that they might have experienced in the past and with Cesar. Right now, I think he’s still confused about who he is and what he wants out of life and he’s torn between the person that he’s always wanted to be and the person who people expect him to be, which is like Spooky. I think they just need to grow up.”

In the flash-forward, the Core Four have gone their separate ways. Even Ruby and Jamal are no longer friends. But what about Jasmine and Monse? “It’s funny because me and Jessica [Marie Garcia], we talk about this often and it never showed exactly where the fate of our friendship ended up,” Sierra continued. “Even though it showed her and Ruby walking together, she might be visiting me during spring break or Christmas break. I definitely think that she considers her a good friend and a true friend, so I don’t think that that would be a friendship that she would let end so soon.”

Sierra has loved exploring Monse and Jasmine’s friendship, which mirrors Sierra and Jasmine’s real-life friendship. Sierra opened up about why Monse and Jasmine’s friendship is so important for her character. “I think Monse and Jasmine are so close because Jasmine accepts Monse for who she is and not what she wants her to be or not who she once was, which is one issue that I think she runs into with maybe some of the other core members of the group,” the actress said. “With Cesar, especially, I think she’s always so focused on trying to get him to see his potential and do better and be his inspiration. I think she sometimes neglects herself and Jasmine is there to remind her that it’s okay to care about other people, but don’t lose yourself in the process. So I think to piggyback off of your last question, that is one of the reasons that she will still remain close to Jasmine is because she knows that Jasmine really cares about her and really has her best interests at heart.”

The show hasn’t been renewed for a fourth season as of now but Sierra has ideas about what she’d like the writers to explore with Monse. “I would like to maybe explore her dad’s side of the family. No one’s ever touched on that,” she admitted. “I’m very curious to see how she approaches situations now that she’s gone off and it’s two years later and no one is friends anymore. I’d be really curious to see that.” On My Block season 3 is now streaming on Netflix.