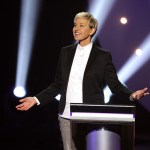 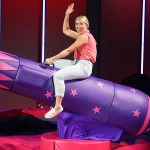 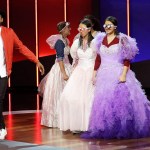 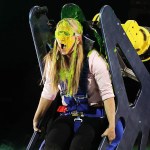 The ‘Taste Buds’ challenge brings the laughs in this EXCLUSIVE preview of the all-new episode of ‘Ellen’s Game of Games.’ One contestant has her face covered in mayonnaise during the game!

The “Taste Buds” game on Ellen’s Game of Games is the definition of messy. The contestants must taste foods while blindfolded and help their partner guess the food that they’ve tasted. The woman in this EXCLUSIVE preview of the March 24 episode of Ellen’s Game of Games dips her face into a plate full of mayonnaise right off the bat. “Your favorite creamy thing on a sandwich,” she tells her partner. He easily guesses mayonnaise.

That means it’s his turn. He gets pumpkin pie. At first, he only tastes the whipped cream. “It’s really sweet,” the contestant says. “And it’s kind of like eggs in it.” When his partner doesn’t guess anything, he snaps, “Say something!” Because of his clues, she guesses egg salad.

He tries again and tastes some of the pumpkin pie. “It’s something that you can have at a picnic,” he says. Eventually, his partner gets fed up and passes on this taste test. This time around, the woman’s taste test is of sprinkles. Too bad she gets those sprinkles mixed in with the mayonnaise on her face! Her clues are a lot better than her partner’s so he’s able to guess sprinkles easily.

The synopsis for the March 24 episode reads: “Contestants will play ‘Don’t Leave me Hanging,’ ‘Buckin’ Blasters,’ and ‘Taste Buds. Special guests, singer/songwriters Charlie Puth and Halsey, join Ellen to play ‘Stink Tank. The winner of each of the first four rounds advances to ‘Know or Go’ and the person who wins that game advances to ‘Hot Hands’ for a chance to win a cash prize.” Ellen’s Game of Games season 3 airs Tuesdays at 8 p.m. on NBC.