Queen Elizabeth II is taking precautionary measures by not shaking hands at royal events amid coronavirus outbreak. Her meeting with Sri Lankan High Commissioner Saroja Sirisena and her husband, Dr. Sudath Talpahewa was photographed in front of an audience at Buckingham Palace on Tuesday, where the queen was noticeably not shaking hands in a photo (seen below).

Just one day prior, the queen was observed refraining from handshakes with guests and officiants at the Commonwealth Day service at Westminster Abbey. Her Royal Highness was also wearing gloves during the entire ceremony — something that is said to be uncommon at investiture ceremonies.

As of March 10, it was announced that the number of cases of coronavirus in the United Kingdom totaled 373. While the queen has been taking preventative action, her grandson, Prince William is remaining calm over the spread of coronavirus. While at the Guinness Storehouse in Dublin on March 4, the Duke of Cambridge cracked jokes and even questioned the severity of the outbreak during his tour of Ireland with wife, Kate Middleton. 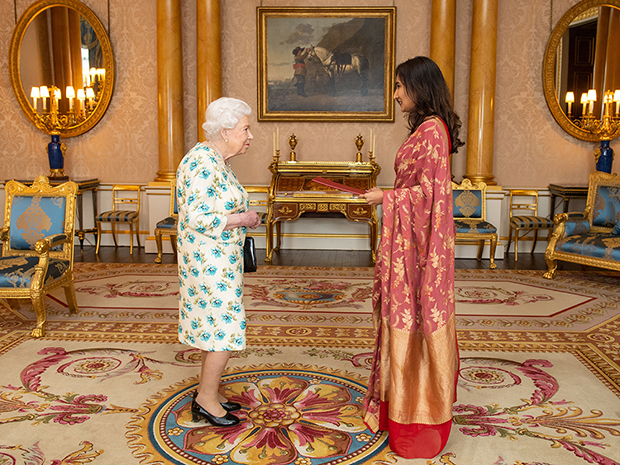 “I bet everyone’s like, ‘I’ve got coronavirus, I’m dying,’ and you’re like, ‘No, you’ve just got a cough,'” William said in a clip posted by Time last Wednesday. “It does seem quite dramatic about coronavirus at the moment.”

He went on to joke, “By the way, the Duke and Duchess of Cambridge are spreading coronavirus. Sorry.” He added, “So we’re keeping an eye on that, so do tell us if we need to stop.”

William’s comments came during three-day royal tour of Ireland with Kate. Following their return to London, William and Kate reunited with his brother Prince Harry and his wife Meghan Markle at the Commonwealth Day service at Westminster Abbey on Monday following Harry and Meghan’s resignation from their official royal titles.