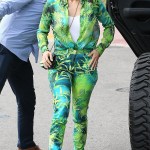 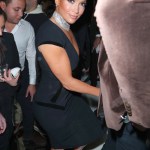 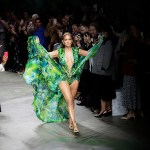 Jennifer Lopez turned heads in this street style interpretation of her unforgettable green dress! The superstar was stepping out for brunch with Alex Rodriguez and daughter Emme in Miami.

No one can rock Versace’s iconic green jungle print quite like Jennifer Lopez! The 50-year-old bombshell slayed in yet another remixed version of her legendary 2000 look while stepping out for brunch at Soho Beach House in Miami on Sunday, Mar. 1. The ensemble consisted of a skinny jungle print jean, along with a sheer open blouse with a collar, both of which can easily be worn off the red carpet! Sporting a simple ribbed white t-shirt underneath the otherwise revealing top, she also added a matching jungle print side purse along with a fresh pair of white trainers. Keeping things casual, Jen finished the look with her signature top knot bun, gold hoop earrings and aviator sunglasses!

The Hustlers star sweetly held her 12-year-old daughter Emme‘s hand, and mother-daughter duo were also joined by Jennifer’s fiancee Alex Rodriguez, 44. While all eyes were definitely on Jennifer in that show stopping green, Emme was looking so cute in a ’90s inspired loose jean, striped t-shirt and running shoes! Jennifer just reflected on the 20 year anniversary of the dress — which she rocked to the 2000 Grammy awards with then-boyfriend Diddy, 50 — and what it was like rocking it again at Milan Fashion Week in Sept. 2019.

“I felt very different [wearing the dress] again,” Jennifer told Oprah Winfrey at the “Oprah’s 2020 Vision: Your Life in Focus” event in Los Angeles on Feb. 29. “When I wore it and I put it on, I was like oh my god, I feel I’m stronger now. I’m in better shape now then I was then…I had never walked in a runway show, so that was my first time doing that. I had butterflies…as I came out and I walked, and I see everybody start standing up. Including [Vogue Editor-in-Chief] Anna Wintour — and I was like, ‘was Anna Wintour standing up?!’” she exclaimed, going to on to add that she was caught off guard when her close friend Donatella Versace had personally asked her to close the show.

“When she asked me to do this, we were sitting together at an event,” Jennifer continued. “It was a split second and I was like, whatever you need of course I’ll do that for you…and everything came together in a perfect moment,” Jennifer added. We couldn’t agree more! Immediately after the show, the “Love Don’t Cost A Thing” singer stepped out at the after party in a sexy blazer dress in the jungle print pattern, also featuring Versace’s iconic oversized safety pins. Most recently, the Golden Globe nominee rocked a blazer version of the look for Versace’s latest ad campaign — and even rocked a catsuit version in her fun 2014 video for “I Luh Ya Papi.”