Lamar Odom has a strong support system in Sabrina Parr. The former NBA player has been struggling with the recent loss of his friend Kobe Bryant, who died in a helicopter crash in Calabasas, CA on January 26 at the age of 41. at age 41. Kobe’s 13-year-old daughter Gianna, nicknamed “GiGi,” was also killed in the crash, along with seven other people.

Lamar, who played seven seasons with Kobe on the Lakers from 2004-2011, compared the pain of Kobe’s loss to what he felt when his infant son died in 2006. “Sabrina has been an incredible source of strength for Lamar since Kobe’s passing,” a source close to the couple tells HollywoodLife, exclusively. “She knows how close Lamar and Kobe were and she’s been doing everything in her power to be there for Lamar in any way she can.” the insider explains, noting that there’s only so much she can do.

“Sabrina also realizes Lamar has to find his own way through the grief and it’s a process that only he can navigate. In the meantime, she’s just been working with him to focus on his health, working out and staying positive,” the source says. 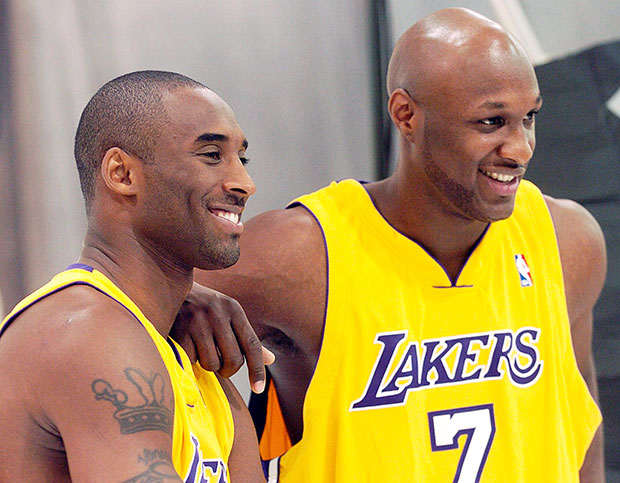 Kobe Bryant and Lamar Odom during their time together as Los Angeles Lakers. (Photo credit: REX/Shutterstock)

A second source went on to reveal that despite the devastation of Kobe’s death, Lamar wants to live his life with Kobe’s advice in mind.

“Lamar is completely gutted by the loss of Kobe. It really has been very hard,” the insider says, noting that Lamar would always seek advice for “little things to the big things in life,” such as his past health issues with drugs and alcohol.

“Kobe was always there for him,” the source says, explaining, “Now, he knows he has to approach things with Mamba mentality — Kobe would want him to move forward that way, and move towards success. He doesn’t want to let his brother down.”

Lamar was present at Kobe and Gigi’s public memorial at Staples Center in LA on February 24. Following Kobe’s death Lamar spoke out on Instagram with a throwback photo of him with Kobe.

“These picture are just the tip of the iceberg of our relationship,” he wrote in a lengthy caption. “He taught me so many things in life that were necessary on and off the court.” Lamar went on to explain all of the ways Kobe was like a brother and a teacher to him.

Lamar concluded his message with a powerful statement, referencing his 2015 coma following a drug overdose. “When I went through that Coma situation if God would have came to me and said we would take me and spare Kobe I would have rather that happened,” he wrote. “In honor of my brother I’m up at 4am tomorrow to get to the gym!”