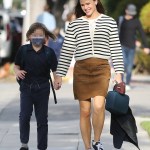 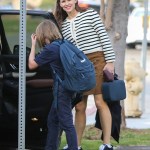 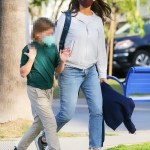 Ben Affleck and ex-wife Jennifer Garner have been working hard to co-parent their three kids together and his recent comments about regretting their divorce have helped them recognize things about each other.

Ben Affleck, 47, got Jennifer Garner‘s attention when he admitted his “biggest regret” is their divorce, in a New York Times article published on Feb. 18, and it’s only helped their already cordial co-parent relationship. “Ben and Jen have a great relationship now so she appreciated the kind words he used so publicly to take ownership for his past with the New York Times article,” a source EXCLUSIVELY told HollywoodLife. “She realizes what a big deal it was for Ben to say the things he did. They talk all of the time for the sake of the kids. She really just wants him to be healthy and happy for their kids’ sake. That’s all.”

Jennifer, 47, proved her dedication for the father of her three kids, Violet, 14, Seraphina, 11, and Sam, 7, when she made headlines for reportedly staging an intervention for him due to his struggles with alcohol in Aug. 2018, three years after they announced their separation. “She will do anything for Ben always because of their children and he feels the same way,” the source explained. “It’s sad their marriage didn’t work, but they both have done their best to move on for the sake of the kids.”

In addition to admitting he regrets his divorce from Jen, which was finalized in 2018, Ben opened up about how his drinking problem became more extensive right before they called it quits, in the New York Times interview. “I drank relatively normally for a long time,” he said. “What happened was that I started drinking more and more when my marriage was falling apart. This was 2015, 2016. My drinking, of course, created more marital problems.”
Ben and Jen are often seen spending time together with their kids on various outings, including at church service and their kids’ sports games, and their smiles and friendly exchanges in those moments have impressed many. Their co-parent relationship has become an example of how getting along for the sake of kids after a divorce is crucial and Ben’s most recent comments about their marriage just adds to that.