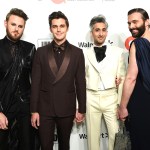 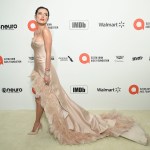 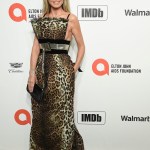 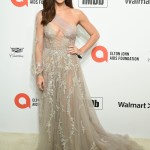 G-Eazy spent his Oscars night sharing some sizzling PDA with a mystery woman in red, and HollywoodLife has obtained EXCLUSIVE pics showing their kiss!

ORIGINAL: He was at the Elton John AIDS Foundation Oscars viewing party, but G-Eazy definitely wasn’t paying attention to the TV during the event. The “No Limit” rapper, 30, had his hands full during the February 9 party, spending the night attached at the hip to a gorgeous mystery brunette — and HollywoodLife has the EXCLUSIVE pics to prove it. In the photos, which you can see below, G-Eazy has his hand pressed on the lower back of a woman wearing a bright red suit. Fitting, because the rapper showed up to the infamous Oscars bash wearing an incredibly bright pink suit, himself.

It’s unclear who she is, but she and G-Eazy are quite familiar with each other. At one point, he grasps her hair and plants a kiss on her cheek. G-Eazy’s cozy date night at the Academy Awards comes just one week after he shared major PDA with Megan Thee Stallion in Miami. After watching the Kansas City Chiefs win the Super Bowl on February 2, G-Eazy posted a series of videos to Instagram showing himself and the “Hot Girl Summer” rapper, 24, cuddling up at a party. The hot clips featured G-Eazy repeatedly kissing her on the cheek while she had her leg wrapped around his waist. The clips have since been deleted, but fans immortalized them on Twitter.

Once fans freaked out about the potential new romance, Megan set the record straight. “Lol alright nowww y’all got all y’all jokes out,” she tweeted a couple days after the videos circulated. “but I am not f***ing G Eazy.” Now, that settles that. Unfortunately, G-Eazy’s Victoria’s Secret Model ex-girlfriend, Yasmin Wijnaldum, 21, saw the videos before Megan’s correction. She unfollowed G-Eazy on Instagram and posted a gif to her Instagram story of Nicki Minaj laughing, labeled “mood.”

Elsewhere at the Elton John party, G-Eazy mingled with tons of stars, like Heidi Klum, the Queer Eye cast, Ashley Greene, Caitlyn Jenner, Sharon Stone, and Bella Thorne. It was a night to remember!