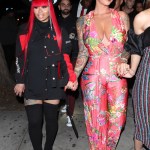 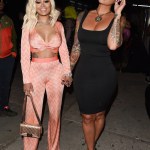 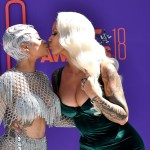 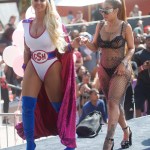 Amber Rose took to Instagram on Jan. 29 to give a shout-out to Amber Rose (and her body!) with a photo and caption, proving that their friendship is back on track.

It looks like things are all good between Amber Rose, 36, and Blac Chyna, 31, once again! After more than a year of them not being seen together, Amber took to social media to post a pic and supportive message for Blac and her incredible body. In the post, Blac’s lower backside, which is full of tattoos, can be seen as she lays on a white sheet before and after what was a treatment at The Tox, a company located in both Los Angeles and New York that specializes in “the Tox technique”, which is “a unique blend of massage that detoxifies the body and mind”, according to their website. “Wow look at my Girl Chyna’s body from going to @thetoxla @thetoxnyc!!! I can’t wait to get my treatment! 😍🔥❤️,” Amber’s caption for the pics, which were originally posted on Blac’s Instagram, read.

Once she posted the kind shout-out, it didn’t take long for Blac to respond with three heart emojis in the comments section. Fans also took notice and replied with excitement over their reconciliation. “Glad to see y’all are friends again!” one comment read. “Yay y’all posting each other again ❤️,” read another. “So happy y’all cool again!! 😩🔥,” a third fan wrote.

Amber and Blac’s unexpected social media support for each other comes after they seemed to stop being friends somewhere between Aug-Oct. 2018. Fans took notice that the ladies, who were close before Blac dated Amber’s good bud Tyga, drifted apart when Blac wasn’t seen at Amber’s annual SlutWalk on Oct. 6, 2018. Since Blac was known to attend every one Amber held since 2011, her no-show was a definite indication that something was wrong between them.

A previous source also told us that Amber was hurt by Blac not showing up to the important event. “One of the biggest days of the year for Amber is her SlutWalk. She finds it very important to put on and appreciates all the support she gets from her fans, sponsors and friends so having Chyna ditch it was a major slap in the face,” the source EXCLUSIVELY told HollywoodLife shortly after the walk, which is aimed to end rape culture, that year. “She was very disappointed in Chyna for not showing up.”

Since Amber also promoted Blac’s appearance at the walk ahead of time, it made her beyond mad. “It will be very hard to forgive Chyna for this, Amber is mad,” the source explained. “It was just very rude for Chyna not to show up especially since she had no good excuse not to in the first place.”

We’re glad to know these two worked out their issues and are back to being friends!