Beyonce, 38, and Jay-Z, 50, just brought a whole new meaning to the phrase “BYOB.” On Sunday, Jan. 5., the power couple made a — erm — splash when they were caught on camera bringing in their very own champagne to the show! The “Bonnie & Clyde” performers rolled up to the swanky Beverly Hilton with their own security, who seemingly held two of Armand de Brignac’s distinguishable gold bottles behind his back! The brand, often referred to as Ace of Spades due to its logo, was purchased by Jay back in 2014 for an undisclosed amount (read: a lot of money). Bottles of Jay’s pricey champagne can reportedly go for over $200K, and, at the lowest end, a few hundred dollars.

Twitter erupted with fans all sharing their thoughts on the bold move, with many also speculating that the pop icon may be pregnant again because she didn’t partake in the champagne toast. One fan tweeted, ” Beyonce did NOT join in the champagne toast at her table. Let the pregnancy rumors begin.” Another commented, “Beyoncé was not about to drink Moët when her husband makes a much more expensive champagne.” You do you Beyonce. You do you.

Champagne and the Golden Globes go hand-in-hand, as the event has been sponsored by legendary champagne brand Moet & Chandon for years. With bottles at each table — 125 cases of Moet & Chandon Grand Vintage 2009 to be exact — celebrity guests could also be spotted sipping on Moët & Chandon Impérial mini bottles on the red carpet. Talk about luxe! While Moet — which is owned by luxury label Louis Vuitton — is still considered one of the world’s finest champagne brands, we’re guessing Jay-Z and Beyonce didn’t want to be seen sipping the competition. 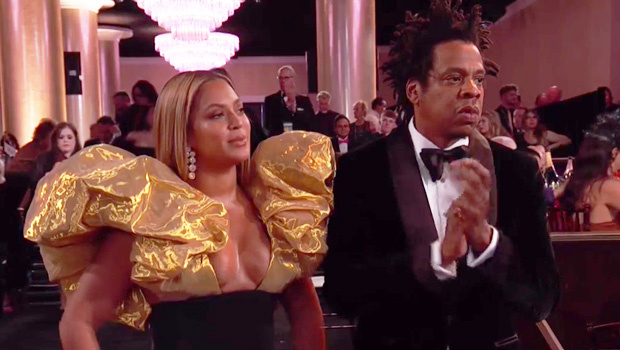 The power couple first proved their stealth skills when they skipped the red carpet and snuck into the event. Their discretion didn’t last long though because but all eyes were on Queen Bey as she arrived to the event in a skintight black gown, which showed off her amazing figure to perfection. The dress featured gorgeous, puffy gold sleeves, and Beyonce completed the look with a sleek and straight hair-do cascading down her back. The neckline of the ensemble was low-cut, adding an extra layer of sexiness to the look, proving yet again that Beyonce can wear pretty much anything.

The Globes were certainly a big night for Bey, who was up for the Best Original Song award for her work on “Spirit” from The Lion King with Timothy McKenzie and Ilya Salmanzadeh. Although she didn’t walk away with a Golden Globe, “Spirit” has also landed on the shortlist for an Oscar nomination — the full list of nominees will be revealed on Monday, Jan. 13.

Related: Big Freedia: 5 Things To Know About The Guest Vocalist On Beyoncé’s ‘Break My Soul’

The singer has never been nominated for an Academy Award before, so this will be another incredible accomplishment if it happens. It looks like 2020 is shaping up to be something pretty amazing for Bey! Good luck!