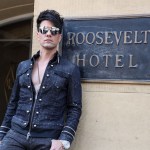 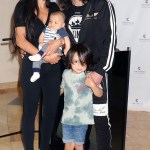 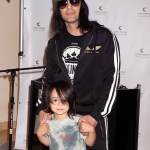 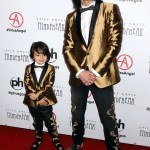 Magician Criss Angel is sharing what a brave little boy he has, as his son Johnny’s leukemia has returned and he bravely underwent a buzz cut before his hair fell out.

Magician Criss Angel‘s precious five-year-old son Johnny‘s leukemia has returned, four years after he was first diagnosed with the disease just before his second birthday in 2015. While he was in remission, the boy managed to grow a long, dark pony tail. But since he began chemotherapy treatments on Dec. 10, 2019, the father and son had the painful choice of cutting his hair off before it fell out. The video is absolutely heartbreaking yet inspiring at the same time over how someone so young could be so brave.

In the video Criss — real name Christopher Nicholas Sarantakos — posted to his Instagram account on Jan. 1, 2020, Johnny is seen sitting in a chair with a hair cutting cape around him while his mom and Criss’ former partner Shaunlyn Benson is crouched down next to her son. “I’m going to cut Johnny Crisstopher’s hair because of his relapse,” Criss, 52, explains standing over his son with a scissors.

“Do you want to keep your hair long and if it falls out it falls out or we’ll just keep it in a ponytail? Or would you be willing to cut it off. It’s up to you,” Criss gently asks Johnny. The boy looks so sad at first, but ultimately makes the incredibly brave decision to let his dad cut off all his hair and shave his head. First Criss cuts off the ponytail then begins going to work shaving his son’s dark locks off.

We must embrace what we can’t control with courage, strength and forever love. #CelebrateLife #2020

“We must embrace what we can’t control with courage, strength and forever love. #CelebrateLife #2020,” Criss captioned the video. After he shaved his son’s head, the Vegas star shared a montage of photos of Johnny, including one in his hospital bed getting treatment with his newly shorn head, another with him smiling while listening to headphones and one last photo of him in healthier times with his longer hair and an orange cape the read “cancer survivor” on the back. Hopefully Johnny will be back in remission again soon.