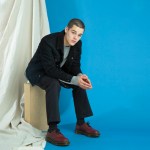 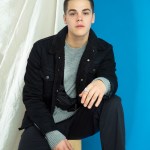 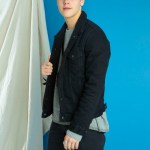 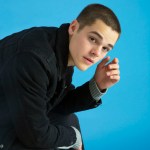 Ahead of his debut album’s release, AJ Mitchell – the singer who made us move with‘Slow Dance’ —  talks with us about his journey from being a ‘shy kid’ in LA to the star ready to ‘take over’ 2020.

“I always just wanted to be the songwriter,” says AJ Mitchell. The 18-year-old singer made sure to stress the songwriter when speaking with HollywoodLife, indicating that he always envisioned he’d wind up behind the piano and not behind a microphone. A self-described “shy kid” from Belleville, Illinois, AJ now beams with the confidence that has seen him perform everywhere from Live With Kelly & Ryan to the KIISFM Jingle Ball concerts. While talking to him, it’s hard to think that there was a time when he’d prefer to fade into the background instead of shining brightly like the star that he is.

“I was like, ‘Oh, I just want to write songs. I don’t know if I can [sing]’ ” AJ says during our EXCLUSIVE interview. “In the beginning, it was very helpful to you know, to have my parents there to help push me to go do that. Once I came to LA, I had a great team around me.” That team was AJ’s management team, family, his attorneys, CAA and Epic Records.

Since heading west, the sky’s been the limit (seemingly reflected in the title of his upcoming debut album, Skyview) AJ released a handful of songs, including the Slow Dance EP, in 2019. The title track is a Top 40 Pop Radio hit, and the rest of AJ’s growing discography has resonated with fans who recognize this superstar in the making.

Despite the growing fame, AJ has kept it humble. He speaks with a grounded sense of the world — feet firmly planted on Illinois soil with his eyes cast towards the stars. Even after a year of accomplishments that have him poised to blow up in 2020, he keeps his focus on what’s really important: the music. “Every time I get up on stage, it’s the best feeling in the world to perform songs that I wrote, to know that it’s meant a lot to those people, and for them to sing it back to me,” he says. “It’s just an amazing feeling.”

AJ talked with HollywoodLife about this feeling, about how his time in LA inspired the opener to his new album, and how fans can see him when he hits the road in 2020.

HollywoodLife: It’s been a busy year for you. You were one of the 2019 Vevo LIFT Artists, and an MTV Push artist. You released music, including your Slow Dance EP. You’re averaging near, six million Spotify listens a month? And you’re about to release your debut album. That’s pretty awesome from a “shy, nervous kid from Belleville, Illinois.”

Yeah. Honestly, it’s crazy hearing you say, say all that, it’s kind of like becoming surreal. Like it’s so surreal.

In 12 months, have you been able to give yourself a chance to kind of take that all in?

You know, every once in a while I try– I mean, there’s so much going on all the time, so it’s hard to sit down, and actually, I take that all in. But when I do get the chance, I try to reflect and be like, “okay, so this happened with MTV. You did the VMA performance. “I try to take that all in and be like, “that is amazing stuff.” And it’s been great, like great opportunities and it’s been a great year.

So, after all of this, do you consider yourself – inside your head – to still be that shy kid?

You’re more comfortable with who you are?

Yeah. I finally understand who I am. I’m at this point where I know what music is, I know what the music is. I know what I want to talk about. So, it feels, it feels really good, and you know, everything is coming together.

While looking up your past, I saw you used to do songwriting competitions with your dad. Do you still do those?

[laughs] Yeah. It’s actually really funny. When I went back home the other day, I saw my parents, and my dad was like, “Oh, I wrote a new song.” And I was like, “I wrote two.” He was all, “I wrote three.” It’s always just a funny joke that we still do with each other.

Do you think these competitions helped you develop the drive that allowed you to reach this level of success so early on?

Definitely. That’s definitely helped out. Now looking back, I think my piano teacher really helped out a lot, as well. I started piano lessons when I was like six, and it was kind of an off-and-on thing. But you know, every time I went, it wasn’t like, “Oh learn how to play this classical music” or learn how to do this. He kind of made it to where I did what I wanted to do.

I didn’t want to learn how to read music. I just wanted to be more creative. I really loved The Beatles. So we got a big old Beatles book with all the songs in it. We just learned a song a day or some days we would just mess around and just write our own songs. I think he really helped out with the creativity side.

You seem to reference this in your “Life Is A Grand Adventure” short film for Vevo LIFT. The short film – spoiler alert – ends with the striking image of a piano on fire. Did you want to include that visual?

Yeah. It was just a very great aesthetic, one that also went towards my song, “Down in Flames.” For me, that song is about communication and to be able to express how you’re feeling with another person. I kind of wrote that song because I saw two people that — are really close to me — get in a really bad argument.

And at the same time, also the same day, I saw Notre Dame burn down. As I watched it, I thought, “Damn, it’s crazy how a building that takes hundreds of years to be built, to be so beautiful and then in a couple hours, can be burned down in flames.” I also saw the resemblance within the relationship – it takes years for a relationship to be built, and then in just one argument, it can just all go away.

That’s how that song “Down in Flames” came to me. I wrote that song a day, and then Vevo saw that and put together the visual. It just worked out and turned out amazing. That Vevo LIFT video is honestly one of the most amazing videos I’ve ever been a part of.

Your album is called Skyview, which is named after the drive-in theater in your hometown.

Did you always know your album was going to be called that?

No. It’s kind of something that just kind of just put together. My team thought about it, and we were just like, ”Oh my God, this is such a perfect opportunity to use [the] Skyview.” Because in my hometown there’s not much to do. The fun things we would do were like, go in abandoned buildings — just explore and get in trouble.

But Skyview was really something. It was the only cool thing to do. And when I think of my hometown, I think of Skyview, and that kind of just pinned it all together. I want this album to kind of let people know where I came from and who I am as an artist. I feel like a lot of people don’t know that side of me, and a lot of people don’t know where I came from. And I think it’s really important with the music that I’m releasing, that people would know that. Cause I think they’ll really understand music and where it’s coming from.

You’ve said that one of your recent songs, “All My Friends,” is more mature than what you put on your Hopeful EP. Are the songs on Skyfall in a similar “mature” vein, or are they the tracks that have been floating around for a few years?

With this album, there’re songs on here there that are a little bit more fun, and there are also songs that, I’m like, “this is a situation that I’ve been through in my life.” For example, there’s a song that’s on the album — it’s going to actually be the intro on the album — that I wrote two years ago and it’s about the situation that I was in when I first moved to Los Angeles.

When I first moved to LA, I was in a group called Team 10 for a little bit, about four or five months. It was really weird coming from a small town to going to LA and just seeing people with so many followers. They would take videos every day. It was weird for me because all these groups of people, we’d all get together, but no one really knew each other.

As soon as the camera came on, it was like everyone knew each other. It was super fake. Once the camera was off, everyone went their separate ways. It was super weird for me at the time, and I just didn’t really get it. Once I moved out of that situation, I kind of wrote a song about it. That’s actually the start of the album because everyone knows that’s what happened in my life. It’s a big part of my life, and I finally get to talk about it on the album.

You were thrust into this huge social media world at a young age. Did it sour your whole attitude on social media, or did it just give you a better idea of how you wanted to represent yourself online?

It definitely gave me a bigger perspective of you know, how I want to use social media. Before I joined Team 10, for four years, I was posting every day, talking to the camera and saying, “this what I’m doing, I’m doing this.” Having to keep up with it every day and a couple of months… I would say a month ago, I went through a thing where I was like, “okay, this is way too hard, and it doesn’t feel real anymore.”

We’ll have to tune into your accounts when your album drops. Do you have a tour signed up for Skyview’s release?

After such a year, what’s one of the things you want to accomplish in 2020?