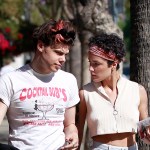 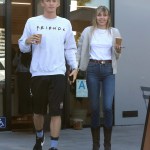 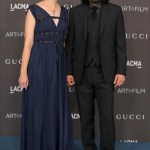 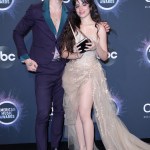 FOX Sports host Holly Sonders had no problem showing off her glistening engagement ring after her gambler boyfriend ‘Vegas Dave’ got down on one knee and asked her to be his wife.

Grab the tissues! Holly Sonders, 32, looked to be the happiest girl in the world when her pro gambler beau Dave “Vegas Dave” Oancea, 42, proposed to her during a sunny day at the beach (SEE PIC HERE!). “I never thought this day would ever happen,” he wrote in his own version of the romantic snap on December 17 while she captioned hers with one simple yet powerful word: “Yes.” Holly then followed that up with a photo of her insanely massive ring in a separate Instagram pic that left fans of hers absolutely speechless. “Bling blingggg. Congrats!!!!”, one follower wrote in the comments section. Dave and Holly later celebrated the big news by posting a 90-second video of them dancing to Aerosmith & Run DMC‘s “Walk This Way” while wearing adorable sashes with the words “JUST MARRIED” splashed across. Did we miss the wedding or are they just THAT EXCITED for their future together?

Holly and Dave are never shy about showing their love for each other on social media. She poked fun about the facial expressions seen in their pics by purposefully posting ones of them smiling while the two appeared to be having a blast in Cabo on December 15. “Maybe I’m mistaken but I’m hearing a lot of haters wanted more pics of Dave and I looking happy?” she joked as the caption. “So here you go.”

The online world is how Holly and Dave met initially as their relationship began after he left a comment on one of her photos. They then started DM’ing one another and the rest is history. “I was so taken by Dave’s personal story and his rise above adversity to become a self-made man that I sincerely fell in love with him instantly,” she told PEOPLE.

Dave, who made his fortune by placing sports bets in Las Vegas over a 15-year span, knew she was the one simply by them just having fun with one another.  “A couple of days ago, she tried to get domestic and tried to wash dishes in the dishwasher, but accidentally put dish soap meant for the sink in the washer,” he said.

Holly and Dave join a myriad of other couples who got engaged in 2019. Others include Oscar winner Emma Stone, 31, and former Saturday Night Live writer Dave Mccary, 34, and singers Hilary Duff and Matthew Koma, both 32.