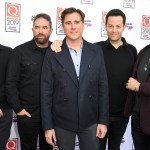 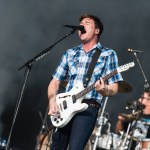 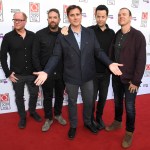 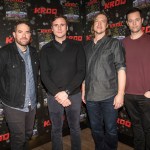 The gauntlet has been thrown down – sorta. Ahead of Weezer, Green Day, and Fall Out Boy hitting the road, we have an EXCLUSIVE video of Jimmy Eat World picking two epic headliners for a tour that would put ‘Hella Mega’ to shame!

One of the most highly-anticipated tours of the upcoming decade kicks off on June 13, 2020, when Green Day, Weezer, and Fall Out Boy come together for The Hella Mega Tour. This could be the biggest tour of the year – only if Jimmy Eat World doesn’t beat them to the punch. The band — Jim Adkins, Zach Lind, Tom Linton, and Rick Burch — chatted with ALT 92.3’s Kevan Kenney backstage at RADIO.COM’s Not So Silent Night in Brooklyn. When asked who’d they pick for their rival tour, the band was first, at a loss. At first, lead singer Jim Adkins couldn’t believe the tour’s name (“That’s what it’s called? The ‘Hella Mega Tour?’ Huh.’) while drummer Zach Lind “it would be hard for us to create a rival tour.”

“Paul McCartney and Led Zeppelin – reuniting,” pitched Jim, channeling the best of RADIO.COM’s classic rock channels. “That might be enough,” said bassist Rich Burch, Zach had a different idea. “The only way to compete with that is to go the country route.” The four put their minds together and came up with two names: Garth Brooks and Taylor Swift. While the group realized agreed the only combined power of Garth and Taylor could take down Weezer, Fall Out Boy and Green Day, they were presented with a new problem: who headlines? After they figured it out, Jim came up with a name for this tour: “The Hella Hella Mega Tour.”

It was two other bands that inspired Surviving, Jimmy Eat World’s tenth studio album, released in October. The new record has been described by Spin as “recognizably Jimmy Eat World, but with an additional stripped-down rock’n’roll swagger.” This was intentional. “Once you define the lines you want to color within, it’s pretty easy to adjust your creative decisions around that,” Jim told Spin. “If you listen to ‘All the Way (Stay),’ there’s a lot of negative space in there. There are sections of the song where you’re basically just listening to the snare drum decay in the room, and that’s it, just nothing else happening.”

“In a way, it makes what happens after that even more heavy,” he adds. “If you remove things, or if you have less things that are supposed to do more, and that’s your mindset when you’re making creative decisions, you just choose things that will mean more. Listen to a Rage Against the Machine album, or listen to Van Halen. That’s just a four-piece band playing, and you don’t miss anything.”

Wait, a minute. Rage Against The Machine is reuniting in 2020, and Van Halen has nothing going on right now (except for defending Billie Eilish for not knowing who they are.) Forget Garth and Taylor – why not do the “Hella Hella Mega Tour” with Rage, Van Halen, and Jimmy Eat World?