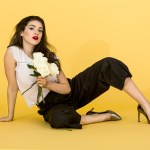 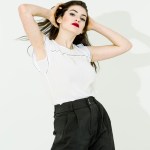 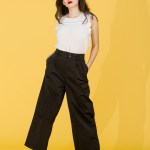 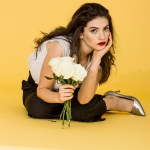 Ella Rubin juggles high school and Broadway as she is currently starring as Rosa in ‘The Rose Tattoo.’ The actress spoke to HollywoodLife about taking the stage.

Ella Rubin wishes the story of how she got the role of Rosa in the Broadway revival of the Tennessee Williams comedy The Rose Tattoo was more exciting, but she did admit the moment she read the script, she “needed to do everything in my power to get the role.” “It’s so rare that I get to audition for a nuanced and layered teenage girl because I think a lot of times teenage girls are underestimated or aren’t depicted as powerfully as they truly are,” the teen said of the character. Ella beautifully portrays the complex and rebellious Rosa, the daughter of Sicilian-American widow, Serafina (Marisa Tomei), who has continuously mourned the loss of her husband for four years. Ella navigates Rosa’s journey as a teenager who is exploring her sexuality, as well as her desire to assimilate into a sweet Southern girl, away from her Italian roots.

Ella spoke to HollywoodLife.com in an EXCLUSIVE interview about getting into character, working on her Louisiana/Sicilian accent and sharing the stage with Marisa Tomei.

HollywoodLife: Your character Rosa is super energetic and bold, yet emotional. How did you approach her?

Ella Rubin: There were a few factors that really helped me form her and who she becomes. I will say it changes every night because I may say a word differently and it informs the rest of that sentence, which informs the rest of the scene for me. I first started by making a Venn diagram, because I begin the show as 12-year-old Rosa. Then, a few minutes later I am 15-year-old Rosa. So, I’ve really wanted the dichotomy between those two ages to be palpably different, in both the physicality, the voice and her energy. And so I made a Venn diagram of her different characteristics, but also who she is in her core, because I think we all have a core personality that won’t change drastically and those core values and characteristics were kind of how I led the rest into everything else.

Then, breaking down her psychology was really important for me and I did that by journaling as her. I would get into character and then take my journal and whatever scene I was thinking about as her, after I left that scene like, I would write, and I would even discover things as I was writing. Lastly, making playlists of music that was only from the ’50s in her era that I think she would’ve listened to.

HL: Do you find that Rosa is rebellious because of her mother’s response to her trauma or because she lost her father at a young age, during those developmental years in her life?

ER: I think it’s all the above. Obviously, it is a very hard thing to lose your father at any age, and I think because she was 12 that is a traumatic experience. But I think what trumps that was her mother’s response to it. She also is very strong girl who I think would have gotten through with the help of her mother, but the fact that she didn’t really have her mother and she had to sort of take on this maternal role herself, really made her grow resentment toward her mother. It was this restriction of being a child. And that’s why when now, she’s 15 and she meets this boy, it’s the sort of snap change of rebellion. She was never really that rebellious and all of a sudden she’s threatening to cut herself.

HL: She really thinks that Jack is ‘the one’ — is this a product of her rebellion or does she actually love him?

ER: Jack has a special place in my heart, but I think it was both, because she could have felt the way she feels about Jack, about many guys. But I think it was the reciprocation that really sent her into this love. The moment that she saw him, she obviously she felt a connection, but at the same time, she was looking for,  subconsciously, something, for anything to grasp on to, and Jack was the perfect storm. She got attention from him emotionally, and he called her beautiful and she’d never thought that about herself.

HL: Something I found interesting was the sexual awakening Rosa had as a young girl in the ’50s — something she felt no shame about, whereas even today, women are made to feel shame about sex.

ER: It makes my heart soar that you even picked up on that! I guess for women it would make sense to pick up on it, because we all feel shame from a very young age about our sexuality because no one talks about it. It’s a very confusing thing to be young and feel any sexual feeling because you don’t know if it’s normal. For Rosa, I think the reason why she didn’t have shame was, first of all, there’s a magic that she encapsulates and at first I was a little bit uncomfortable with the fact that she didn’t feel shame. I was like, ‘Well how does that make any sense?’And then I realized this is Tennessee Williams, one of the only writers that truly knew how to write women. And then, because when she was 12 and her parents were married, they had a very openly sexual relationship in front of her, but we never got to see Serafina’s wild sexuality with Rosario that I saw, as Rosa. When you’re 10, 11, 12, those are some of the most formative years of your life and it’s very important how you see sex when you’re that age. It informs how you see sex when you’re older, so I think there was a freeness that she was witnessing.

HL: Now, your accent in the show. You quickly switch back and forth between a Sicilian accent to a Louisiana twang. How did you master that?

ER: I really had no idea what I was doing. Once we began the rehearsal process, I worked with a dialect coach who really helped me nail down the Louisiana accent and the Sicilian, separately. Then, it was up to me to practice vacillating between the two really, really rapidly. Also it came from the mindset, because Rosa speaks Sicilian in some moments for a reason — and usually it’s when Jack is not around, and not when she’s trying to be this American assimilated girl.

HL: This is your second time working with Marisa Tomei! What has it been like sharing the stage with her as your mother?

ER: I learn so much all the time. I feel like she’s really helped me ground myself in certain scenes and it’s something I hadn’t thought about much and it’s been really, really, really special. Our on-stage presence definitely came from all the rehearsal period — being able to encapsulate that love and make the audience feel the mother daughter struggle because of how much love there was. I think that’s why mothers and daughters have such strife in their relationship, because there’s such a great love there and that’s something you can’t tame.

The Rose Tattoo is currently on Broadway at the American Airlines Theater in New York City.