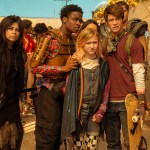 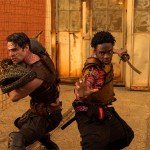 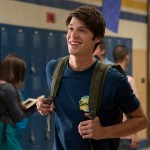 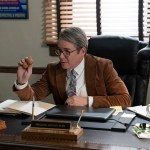 Over the course of ‘Daybreak’s first season, fans came to love the fierce and damaged Turbo. HL spoke EXCLUSIVELY Cody Kearsley about transforming into the character, Turbo and Wesley’s face-off, and more.

Turbo Pokaski is really misunderstood. At first, it appears that Turbo is just the villain in Josh’s story, but he’s so much more than that. He’s a lonely and damaged young man with scars that stem far beyond the physical ones on his face. HollywoodLife talked EXCLUSIVELY with Daybreak star Cody Kearsley about Turbo’s evolution and getting into the character’s mindset. “He’s not a villain at all,” Cody said. “When you’re leading any army, you have to rule with somewhat of an iron fist to keep everyone in check. Especially with kids who are going through all of their own emotions and are still growing up. You have to rule even stricter. There have to be more strict guidelines. When I have to kill someone, it’s so that everyone else will stay in line. Because if they don’t stay in line, there are zombies outside, there are unexploded missiles, there are other tribes. If I don’t rule in somewhat of a way where everyone’s a little bit afraid of me, they’re going to get themselves killed. They kill one kid or let a hundred kids get killed. He is doing what he thinks is best. He really does want to protect the kids because he wants to be like his father. He wants to fill his shoes in the only way that he knows how in this new world where death is kind of a common occurrence.”

Halfway through the season, the show reveals that Wesley and Turbo have been in a secret relationship. To say that things are complicated between them is an understatement. Wesley has sided with Josh, while Turbo wants to kill Josh. Towards the end of the season, Wesley and Turbo face off in a duel which ends with Turbo telling Wesley that he loves him and Wesley firing his gun, which is thankfully only filled with confetti. “They have their own issues in their own relationship, but also the love kind of gets in the way of their purpose,” Cody explained. “I’m trying to lead this army, trying to protect the kids. He’s on the opposite tribe, so we’re kind of enemies. We’re warring. But at the same time, we’re sneaking around, still hooking up, and still having these romantic rendezvous. It’s either that we stay together, and we love each other, and we run off, or we continued to help both of our opposite sides. It’s kind of like we have to choose between our purpose and our love, which is kind of what that last battle standoff was. I needed him to choose his purpose.”

Even though Turbo and Josh joined forces at the end of the season, Cody doesn’t think they’ll ever be friends. “I don’t know if Turbo could be in a position where he’s not number one,” Cody said. “He wants to be a leader. He’s a leader by nature and by desire. If there was a case where Turbo had to join Josh’s tribe when he was a leader, I think Turbo would rather just go off on his own and build his own army. I don’t think we’ll ever be friends or in the same tribe.”

For nearly the entire series, Turbo doesn’t say a word. “That was one of the best things I’ve ever done. It was actually very liberating. I did a little bit of mask work in school, so it was nice to just be able to explore the character with purely the physicality of the body, the head movements, and a few grunts here and there.”Cody knows exactly why Turbo can’t speak. “Essentially my face just got burned and my throat got burned when the bombs dropped just from the blast. I think it kind of burned up my vocal cords, and every time I speak, the sores kind of open up so it bleeds when I speak. It’s just all types of messed up.”

Cody said that Daybreak has been “best experience” that he’s ever had on set. “When I got the audition, before I even had the audition, I ordered the graphic novels and I immersed myself in the world so I fell in love with it right away,” Cody continued. “This was always a really important thing for me even before I booked it. Because I always had this feeling that something about this is different. It was really nice to experience this with a bunch of fresh eyes. We’re all kind of a little family, a little unit. It was really incredible.” Daybreak season 1 is currently streaming on Netflix.