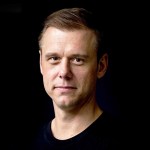 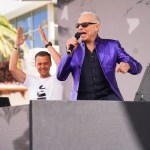 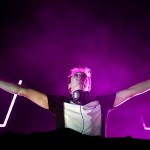 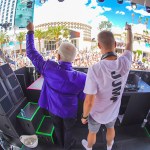 Armin van Buuren, a name synonymous with dance music, will get you moving with his new album, ‘Balance.’ The five-time #1 DJ in the world talks with us about the record, how working with NE-YO was ‘inspiring,’ and what’s next for him.

Long before the opening beats of 1997’s “Blue Fear” set the dance floor on fire, Armin van Buuren has been a beating heart, pumping the lifeblood into the hypnotic world of trance. The electronic music maestro has spent the last twenty-five years pioneering and championing this version of dance music. Be it in the DJ booth or on his weekly radio show, A State of Trance, Armin’s love for the music is undeniable. With that said, trance music’s No. 1 “ride or die” DJ is not afraid to look beyond the genre’s borders, as evident in his new album, Balance. The two-disc set, released on Oct. 25, is, as Armin says in a statement, “a new chapter in my book of life, the result of venturing into known and unknown territories while finding the balance in between. This creative journey gives me the energy to do what I do, to keep going.”

Balance achieves exactly that. The man who topped DJ Mag’s Top 100 poll five times has provided 28 tracks that include pure dance music and collaborations with James Newman, Candace Sosa, and NE-YO. Armin spoke EXCLUSIVELY with HollywoodLife over email, discussing why Balance was ultimately about him having fun, what fans can expect with the upcoming 1000th episode of A State Of Trance, and what 2020 has planned for him.

HollywoodLife: Your new album, Balance, is a 2-disc compilation: one disc full of dance music, the other full of “pop crossover” tracks. As a man synonymous with trance, what was the motivation or inspiration with making more pop, vocal-driven tracks?

That means that I may be making a hardstyle track on one day and a more trance track on the next. I don’t want my sound to limit me creatively. Having said that, though, my home will always be trance. I just want to see how far I can stretch my creative flow. I don’t want to think about what music should be; I’d rather think about what music could be.

Regarding the title Balance — in a recent interview, you spoke about how trance had to adapt in a world being changed by EDM. It’s almost as if the genre needs to find the spot with its past while evolving to the present. Did you name the project because of how trance needs to achieve this balance, or is this assumption a bit “off-balanced?

It’s not up to me to decide where trance needs to be. That’s up to the fans and the scene as a whole. But if you look closely at what’s happening, you can clearly see that other styles and genres are slowly influencing the overall sound of trance. For example, the psy-trance sound had a massive impact on the sound of a lot of records. But no sound will ever stay the same.

I can already see your collaboration with NE-YO, “Unlove You,” blowing up. How was it working with him?

Very inspiring. I got to have a close look into his world and the way he produces and writes. He has a very particular sound. That’s because of his vocal chain, the combination of effects that create his unique sound. I think I learned a lot from that.

Was there a particular track on Balance that was, for lack of a better term, “more successful” than you think it would? Were there some happy surprises on this project?

I see the whole project as 28 little presents to my fans. Each track has a history and a unique way it came together. One of my personal favorites is “Wild Wild Son” with Sam Martin. It was written for his (then unborn) son, but the message clearly relates to my own son (Remy, 6 years old) as well. I recorded real strings and drums for this one, and the song just touches me a lot. The track became a big hit in Holland, which I didn’t expect.

It may be a ways away, but the 1000th episode of A State Of Trance is on its way. Are you already planning something big to celebrate this milestone?

Oh yes, oh yes! More news coming soon. But for now, we’re focusing on ASOT 950. I just announced the theme – which will be ‘Let The Music Guide You’ – and we’re celebrating big on February 15, 2020, in the Jaarbeurs Utrecht.

You were born in a time without the Internet. As this technology became ubiquitous, I imagine you witnessed its influence trance music (and just music in general.) Since technology is a double-edged sword, what would you say is the best thing the Internet has done for trance/dance music, and the worst thing?

The best thing is that this music can now reach millions of people that didn’t have access to this kind of music before. The internet has made the scene grow a lot. The worst thing may be the negative side of social media. Although, I think social media is a great thing overall, the (unfounded, harsh) negativity can really ruin artists’ lives. It brings extra pressure.

The biggest question is, what’s next? 2020 is around the corner. Are you looking forward to a low-key year (especially since you’re a father of two?) Or, in the coming months, do you have something big planned?

I’ll be DJing less for sure, but I planned a few big tours as well around the ‘Balance’ album and some more surprises for sure ;). I guess I’ll be power touring a lot: 14 days on the road and then 21 days at home.

Balance is out now on your favorite streaming service.