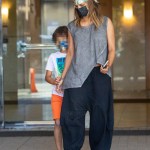 Another day, another revealing photo of Halle Berry! — And, we’re not complaining! The actress posted a photo of her reflection where she’s topless with her hands over her breasts. Halle also showed off her new blonde braids in the sexy photo.

Is there truly a bad photo of Halle Berry? — Our guess would be, absolutely not. The Academy Award-winning actress, 53, shared a topless photo of herself staring into a window looking at her reflection on Halloween. Halle had nothing on but a pair of black pants as gazed at what appeared to be a city landscape.
“When silence is golden,” she captioned the photo in a post on Instagram. Halle’s new long, blonde braids were up close and personal in the shot, which was clearly captured by someone else since her arms were wrapped around her bare chest. She posed with a straight face and her head tilted downward.
Before Halle debuted her new light hair and braids, she revealed another hair do’ — stunning cornrows — in an Instagram photo in mid-October. In promotion of her new film, Bruised, the actress shared a group shot of her with four other fierce women all decked out in Bruised gear. She had her braided hair back in a tight bun as she, along with her girl squad, held up clenched fists.

When silence is golden ✨

Halle’s no stranger to sharing revealing photos with her near 6 million followers. Most of her feed is filled with sexy photos and workout inspiration, as well as her travels and sometimes, her children, Nahla, 11, and Maceo, 6.

While Halle is very active on social media, fans have noticed that she’s taken a significant step back from the spotlight. The brunette beauty seemed to address the buzz in a post of a quote she shared to Instagram, October 8.

“I didn’t disappear. I traded,” the beginning of the message read, followed by seven bullet points explaining why.

What exactly did Halle trade for? — “Nights out for knowledge seeking. Parties for intimate gatherings. Chasing money for chasing purpose. Meaningless work for my passion. Being busy for protecting time. Soul extortion for soul searching, and living for other for living my life.” Halle concluded with another quote in her caption, which read, “Sometimes the most important word you can learn is ‘No.'” Preach, girl!