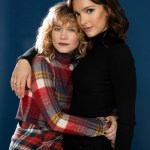 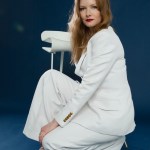 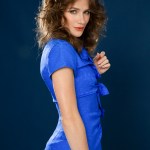 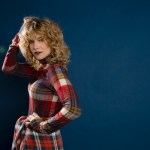 ‘For All Mankind’ is introducing us to a whole new world. The cast of the Apple TV+ series spoke with HL about exploring an alternate history regarding the space race, being a woman in 1969, and more.

For All Mankind has endless possibilities when it comes to storytelling. The Apple TV+ series explores what would have happened if the space race had never ended. This “what if” take on history will focus on the lives of astronauts, engineers, and their families. One of NASA’s main focuses is sending a woman into space, so that shifts the dynamics of the characters quite a bit. HollywoodLife sat down EXCLUSIVELY with Sarah Jones, Shantel VanSanten, Wrenn Schmidt, and Jodi Balfour to talk about what we can expect from this alternate history series.

Sarah plays Tracy Stevens, whom she calls a “reluctant housewife.” Tracy is the wife of astronaut Gordo Stevens. Sarah says that Tracy has “put any sort of ambition she had that might’ve been her own to the side, banking on the notion that her husband would probably have more of a chance of becoming an astronaut or getting to the moon.” Once she joins the astronaut training program, Sarah teases that the “tides start to turn, things start to shift, and she starts to recognize herself as an individual.”

Jodi, who plays Ellen Waverly, adds that Tracy’s “realization that this is actually something she wants for herself is such a wonderful conduit for taking us into sort of the way the world changes when the women joined the program.” Ellen is a fellow trainee alongside Tracy. “I feel like you don’t really think much of her for a little while,” Jodi says. “And then, slowly but surely, I could sort of create a space for myself in the overall narrative. And suddenly you realize you’re learning so much about this woman and that there’s far more than the eye sees initially. I feel like my storyline really becomes about, and everybody’s is to an extent, the sacrifices people make in order to be at NASA and do what they want to do. There’s a lot of personal sacrifices she endures in order to be an astronaut.”

Wrenn is Margo Madison, the first woman in mission control at NASA. “It’s 1969, so you stick genius in a woman’s body in that time period and nobody really wants to listen to her,” Wrenn tells HollywoodLife. “She’s usually the smartest person in the room, but she’s not necessarily as far along in her career as she would like to be. So that’s kind of where she’s at when we meet her.”

Shantel plays Karen Baldwin, the supportive wife of astronaut Edward Baldwin, played by Joel Kinnaman. Karen and Ed function as pretty much the “poster couple” of NASA. However, Shantel notes that there’s much more than meets the eye when it comes to Karen. “Throughout the season and more towards the end, we see a lot of the parts of her that she holds on to and the anchor that she has in the past and not wanting progress out of fear and wanting to control everything, a lot of that gets broken apart and chipped away at.”

Each of these characters will face their fair share of challenges over the course of the season. Shantel admits that she didn’t always agree with Karen’s opinions, especially when it comes to progress and change. “I feel as though that was the challenge for me,” Shantel continues. “Karen resists it for so long until it kind of comes crashing down on her. I had to understand why there was resistance to it and find an empathetic part of myself that maybe could understand where a woman would come out of fear for the things that were happening. I didn’t always like Karen and I definitely didn’t always agree with her in myself. But that’s where you’re playing a character and you have to understand the trajectory of the story we’re telling. To be the anchor in the past and the one who isn’t fighting for progress as much was so interesting and went against everything in my head and in my own heart. But then you realize she is fighting for something actually. She’s fighting for what she believes in, which is her pride of the program, her husband, the sacrifices it takes in order to do the job she’s doing, to be the one that’s left behind, to be the one that isn’t involved but is involved in it was really interesting in such a way that kind of sucked me in. In the end, it taught me to be a lot more open to different dynamics of women.”

Karen and Margo couldn’t be more different. Wrenn acknowledges the stark differences between the two characters while sitting next to Shantel. “You have Margo who’s very focused on her career and is not interested in having a family and is very much about her job and is kind of pushing up against a lot of gender barriers and stereotypes,” Wrenn says. “On the other side, you’ve got a woman who has also made a really strong choice. I don’t want to speak for Shantel but I feel like it’s kind of nice to have us both here because I think our characters represent different things. But I also feel like we both play fully-fleshed out characters and we’re both fighting our own battles.” For All Mankind will premiere Nov. 1 on Apple TV+.