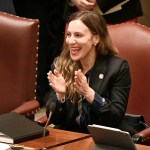 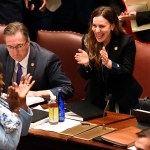 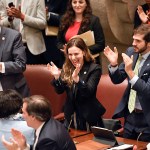 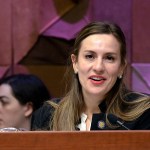 If you are fed up with the laws being passed or sidelined in your town, city or state, then don’t just stay silent. You can run for office and win just like Alessandra Biaggi, who couldn’t stand by–she had to make a difference.

New York State Senator Alessandra Biaggi, 33, is just like you or I, except that after Donald Trump‘s election, she decided that she had to turn her own devastation into action – running for a huge political office. The New York native admits that she spent two months after Hillary Clinton’s defeat on November 8, 2016 “crying hysterically” every time that she got into a New York City taxi and just knew she had to “do something.” Her decision to “do the most good” by running for the Senate in New York , at then just 32–now makes her one of the most powerful and consequential young, female voices and legislators in the country.

Biaggi, along with the nationally known young female House of Representatives Democrats, Alexandria Ocasio-Cortez, 29, Katie Hill, 32, Abby Finkenauer, 30, and Lauren Underwood, 32, is proving that energy and a determination to pass progressive legislation which will benefit women, children, the environment and diverse Americans, is more important than ‘age’, or already having a long established political power base.

Alessandra, a trained lawyer, had worked on Hillary Clinton’s presidential campaign as her Deputy National Operations Director and felt “just complete devastation” when she lost to Donald Trump. “I didn’t know what the world was going to look like…it was just terrifying and overwhelming.”She quickly discovered that she wasn’t alone. “All the cabs I rode in, for two months after that, had tissue boxes and every single one of the drivers would be like ‘that’s ok,’ the person before you was also crying in here.” Biaggi turned those tears into a historic win in the 2018 midterm elections, representing New York state’s 34th District, which includes parts of the Bronx in NYC as well as Westchester County, just outside the city.

She made the decision to run for the Senate after working for the state’s Governor, Andrew Cuomo, following Hillary’s defeat. She had hoped in that role to at least help protect New Yorkers from Donald Trump’s anti-environmental, anti-women’s, anti-minorities and anti-immigrants agenda. “2016 happened and everyone started to panic and say ‘well, what can we do to make sure that our state is safe, and that people who live here are safe, and that we continue to hold up the values that we know New York stands for,'” explains the Senator in an exclusive interview with HollywoodLife.

Alessandra quickly discovered that no matter what legislation she worked on–it went nowhere. The roadblock, she learned, was a group of 8 democrats in the New York State Senate who were actually siding with Republican members and blocking every piece of legislation, from bills to protect women’s reproductive rights, to making voting easier to improving gun safety, which she was hoping would pass.  Even more infuriating, the leader of this group was her own longtime district state senator, Jeff Klein. There was only one thing to do–step up and run against him–be a “giant killer.”

If you think that you are just one person and can’t possibly run for political office, well think again. Biaggi got angrier and angrier when she realized that under Donald Trump’s presidency, “almost every single week there was another action taken to roll back protections for women’s reproductive health” and nothing could be done about it because of her very own state senator. Then, when she started voicing to co-workers, that she was thinking about running against  him, “I was basically met with this, “Oh yeah. That’s so cute. Cute ambition but good luck’…basically ‘you’re totally crazy.'” The now Senator recalls, “There was laughter among my colleagues. Like, that’s the funniest thing we’ve ever heard.” Her colleagues didn’t think that there was any way that an established state senator could be unseated by a young woman. So how did Biaggi respond: “To me, that was the moment where the switch flipped and I decided to definitely run (against Klein). I was like, ‘Oh, really?’ Are you kidding me? How arrogant of anyone to think that anybody owns these seats. These seats are elected by the public.”

Well, as it turned out the public agreed. Biaggi defeated Klein in the district’s democratic primary and then trounced her Republican opponent in the 2018 midterms. She was swept into office as part of the blue wave that swept over the country, including in New York state.

For the first time in a decade, Democrats in New York took over the Senate and the Assembly, as well as retaining control of the Governorship.

Biaggi has made good on her goals and promises to constituents, working to pass a huge amount of legislation. She’s most proud of helping pass the Reproductive Health Act, which protects a woman’s right to abortion in New York state. She co-sponsored the Child Victims Act and sponsored Erin’s Law–both of which fight child abuse by allowing child abuse survivors to bring lawsuits until they are 55, and to provide education to children about sexual abuse. She’s worked to close loopholes in gun safety legislation and currently has sexual harassment bills pending and is fighting to provide health insurance to airport workers, who currently have none. She and the democrats also made sure to provide money in the state’s budget to continue to fund Planned Parenthood and other women’s health clinics, after Donald Trump defunded them. That means New York women still have access to affordable mammograms, cervical cancer screenings, reproductive health checkups and more.

For the 2020 election campaign, Biaggi has already endorsed Senator Elizabeth Warren to lead the Democratic party in the fight against Donald Trump. “I think she’d be an excellent president and in debates with him, I don’t think she’ll be afraid to say things to him that perhaps other candidates maybe wouldn’t say,” she says. Plus, she points out that she believes Warren has thoughtful plans for how to deal with climate change, income inequality, affordable housing and healthcare. Nevertheless, she feels that for anyone who opposes Donald Trump’s policies and behaviors, “The only thing we have to do, is beat” him. “That is the only goal we have here…There is no other goal right now in my mind… we need someone in the White House who is thoughtful and has values.”

As for her advice to any of you who want to make a big difference in the quality of life in your own community, she suggests identifying who the people are in decision-making positions in your town, city or county, see what they are doing to solve problems and if you don’t like what they are doing, then “create a plan on how you would do it better and run for that seat.”

“Believe me, there’s nothing that anybody is magically doing that someone else cannot do,” insists Senator Biaggi. “If there’s something that you feel compelled to do, get up and go and do it, because nobody is…going to give you power to do this thing, take it.”