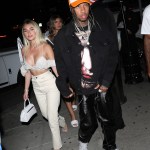 After Kylie Jenner dispelled rumors that she had a romantic reunion with Tyga, all eyes turned to the rapper’s new lady friend: model Emily Hazelnicole Caro. Here’s what you should know about Tyga’s pretty pal at Universal Studios!

Tyga’s date to Universal Studios’ Halloween Horror Nights was not his ex, Kylie Jenner, 22. The makeup mogul denied that she had a “2am date with Tyga” on Oct. 3, but on that same day, the rapper did go on a date with Emily Hazelnicole Caro, 23! Pay attention to the name, because she’s an up-and-coming face in the modeling industry (and apparently, a new companion of Tyga’s, since he was photographed with his arm wrapped around Emily [SEEN HERE]). Here’s what you should know about the beauty who braved the scary mazes on the Universal Studios lot alongside Tyga, 29, and his crew on Thursday night.

2. The beauty walked for Miami Swim Week. The 2019 Miami Swim Week, which ran between July 11-16, served as Emily’s first ever time walking in the event! She strut down the catwalk in nine shows total, for brands like Wildfox Couture and Monday Swimwear.

3. Emily has more than 8,000 Instagram followers. An influencer on the rise! Emily often posts photos and clips from her modeling gigs and travels.

4. You may recognize her face from familiar campaigns. Emily modeled the country western-inspired fits in the campaign for Lil Nas X’s collaboration with Wrangler, in honor of the rapper’s viral hit “Old Town Road.” The collection was first teased in May 2019.

5. The model used to work at Ulta. Emily went from walking the aisles of Ulta as an employee, to having customers see her face in aisles of Ultas nationwide! “Mind blowing to me that i went from working at an ulta to my campaign for T3 being in ultas everywhere!” Emily wrote in a Facebook post on July 20, which showed her posing by the advertisement she did for the hair tool company. She added, “There was 3 other girls that did this campaign with me and the fact they picked my photo to use as the display is so sick!!”