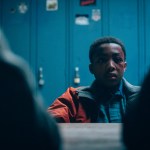 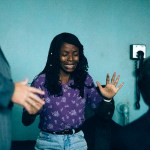 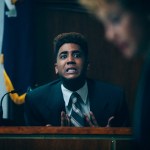 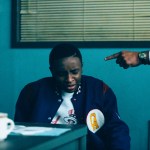 Marsha Stephanie Blake is now an Emmy nominee because of her incredible portrayal of Linda McCray in ‘When They See Us.’ She talked about speaking to the real Linda, working with Caleel Harris, and more in our EXCLUSIVE interview.

Marsha Stephanie Blake earned her very first Emmy nomination for Outstanding Supporting Actress in a Limited Series or Movie for her terrific performance in the Netflix miniseries When They See Us. She portrayed Linda McCray, the mother of Antron McCray, one of the Central Park Five who was wrongly convicted of the 1989 rape of a woman in Central Park. All five of the men were later exonerated and have since become known as the Exonerated Five. The 4-part miniseries is now nominated for 16 Emmy Awards.

HollywoodLife spoke EXCLUSIVELY with Marsha Stephanie as part of our Emmy Contenders series about her incredible portrayal of a mother who is forced to watch her son be imprisoned for a crime he did not commit. From the beginning of Antron’s nightmare to the end, Linda gave her son hope. Marsha Stephanie discussed a key scene with young Antron, played by Caleel Harris, in prison and what it meant to have Antron’s blessing. She also opened up about how the real Linda influenced her portrayal and how the case was “always” in the back of her mind.

When you got the role of Linda, how familiar were you with the Central Park Five case?
Marsha Stephanie Blake: Mildly familiar. I was a young person living in New York at the time and I’d just come from Jamaica. I remember when it happened just because of the feeling in my neighborhood and my house. I have one older brother and one younger brother, and I remember my parents specifically talking to my older brother about it and being like, “Don’t go to the park.” Which is a ridiculous thing to say to a kid, but it was that kind of spring. This seemed like it could happen to anyone. I think for the most part the people around me presumed that the kids were innocent and they were being railroaded into something that they didn’t do because so many things didn’t match up. There was definitely a feeling of fear that I remember coming from my parents and from the neighborhood. I lived in Queens so I’m sure it was much more intense in Harlem and definitely in the upper west part of Harlem. I don’t think I ever knew the kids’ names until I was a grown-up and they were exonerated and then they got their restitution, but it was always in the back of my mind because it’s such a major thing. If you were a New Yorker, you just know about it. It affected you in one way or another if you were a New Yorker at the time. So it was always in the back of my mind.

What was it like for you having Antron’s blessing to tell his story and for him to be a part of it with you and the rest of the cast?
Marsha Stephanie Blake: It meant everything because Antron was never wanting to be involved. He wasn’t in the documentary, he didn’t show his face, he didn’t want to be on camera. He wanted to try to live a private life. Antron, his mom, his kids, and his wife just wanted to, for all intents and purposes, disappear because everything out there about them up to that point had been so negative. I can’t even imagine, when you know you’re innocent, and you’ve lived a good life, and the thing that’s following you is this hugely negative, traumatic, ugly, violent thing. So he wanted to stay away from it and I know his mom definitely did. They were very wary about sharing their story with just anyone and I think it definitely took Ava [DuVernay] making a phone call. You trust her because she actually cares about the subject matter. It’s very clear. She convinced them, truthfully, that she was going to take care of them and she was going to take care of their story. She was going to honor them and their families in a way that had never happened before. So for Antron to give Ava his blessing and then to give me his blessing meant the world.

I also spoke with Miss Linda before she passed away. I had a phone conversation with her. Michael K. Williams was also on the conversation and Ava, and she shared a lot of personal details with us and she would say, “I don’t want to talk about this, I don’t like talking about this,” which is understandable. But then she shared with us for almost an hour. I’m completely honored that they trusted us enough and let us also have the freedom to create within a space that, as much as it’s me being Linda, I’m also playing my version of Linda because I never even got to meet her in person. So we still had to create a space as actors but with the understanding that we were playing real people. It’s actually a beautiful marriage of the two things. I feel like it’s what you want as an actor. It’s one of those roles that you’re dying will come along at least once in your career, and I was lucky enough for it to happen and be a story that touched my childhood in such a way.

So many scenes in this mini-series affected me, especially the one with Caleel in prison when you’re saying, “I’m walking through this with you. It’s you and me.” Talk me through what it was like approaching that scene and doing it alongside Caleel, who is just one of the most fabulous young actors.
Marsha Stephanie Blake: He’s so good, and he’s such a sweet kid, too. All of them are just very well brought up. I just want to put that out there. They’re not Hollywood kids. They are very, very well mannered, amazing, talented human beings. So that conversation was something that came directly out of Miss Linda’s mouth. I think one of us had asked her about visiting Antron in prison. I think I had asked her what would she try to do to make him laugh or try to get his mind off what was going on, and she said something really profound which was when she was there — even though alone in her own house or when she stepped out of the room she would completely fall apart sometimes — she felt like when she was in his presence she had to make him feel like all was not lost, like she couldn’t let him dwell in despair. So even when he told her about this dream, this ominous dream, she turned it around to mean something positive for him.

So while I was doing that scene that’s what I was remembering, just her state of mind in seeing her child in prison, because my thing is I have a nine-year-old and a five-year-old. Every time I would think about what this mom went through it would break me down. I feel like every scene I would start out crying and then I’d have to just pull myself together because she wasn’t that kind of person. I think she would have her moments for sure where she would break down but really she was a strong, formidable woman. She knew she had to feel that strength in front of Antron. I think I probably did a couple of versions where I was falling apart a little bit and then I pulled it together and luckily the one they kept is the one where I pulled it together because it was about me making sure that he had hope. Miss Linda was all about that. She was about keeping Antron hopeful in spite of everything that was going on.

Jumping back to Caleel, one of the things that this miniseries showcases is 5 incredible young actors that have just burst onto the scene. Everyone’s talking about them. What was it like for you to see them develop and become just these masterful actors in front of your eyes?
Marsha Stephanie Blake: You know, honestly, I don’t even know that I saw the development. They were good from day one. It was remarkable. I did a rehearsal with Caleel just talking through the scene and stuff and I was like, “This kid is so intelligent.” Caleel is super well thought out and intelligent. I couldn’t believe he was the age he said he was. He looks like such a baby. They all look so young. I mean, at times he looks like he’s 10 years old. They all look so young but are very, very intelligent. Ava did a remarkable job and her crew did a remarkable job of choosing these guys because whatever they lacked in a technical knowledge they made up for it in just their raw emotion, their relationship with the characters, and just their intelligence that they were able to understand these complex kids in ways that I don’t know that any other kids would’ve been able to do. But watching Caleel, I love that kid. I have two girls, and they call him their big brother. They love him. He’s a dear, dear person and I am so excited to see what they do next, all of them because they are incredible. We’d seen Jharrel [Jerome] a little bit before but episode 4 is the most heartbreaking thing I’ve ever watched in my life. I can’t even talk about it without getting choked up. I’m just so proud of all of them. They are just incredible.

When They See Us has made such an impact all over the world. What has this experience and being part of this meant to you?
Marsha Stephanie Blake: Where do I even begin? I don’t go anywhere without someone talking about this series. I was at a CVS on Hollywood Boulevard the other day and I was just sitting down, eating my snack, and waiting for my Uber. There were a couple of people, not tourists, just guys walking to work or whatever who came over and said, “Are you in When They See Us?” I said, “I am.” They were just so polite and they almost started crying. It’s a different thing than a regular person who comes up and has seen you in something. It’s a completely emotional thing. I was telling my friends the other day that I always feel like I have to engage in more of a conversation with people because the way they approach me is so emotional. It’s not like, “Oh, I saw you in Orange is the New Black, you’re great. Can I take a picture?” It’s never that. It’s always like, “Can I talk to you about my son who just happened to…” or “I watched it with my mom and my mom couldn’t stop crying.” It’s very emotional these conversations that I’m having with people. It’s one of the most impactful things I think I have ever done and will ever do in terms of that, but also for me, it all goes back to the [Exonerated] Five, right? It goes back to we have these five guys whose lives were completely changed in a horrible way, and now I think they’re getting the love they deserve. It’s taken a long time. It’s taken 30 years, and God forbid any of us should ever have to go through 30 years of that, but at least now they’re getting the kind of attention that they deserve, which is positive, loving, and honorable. I feel like that means more to me than anything else.