Hey, remember when Miley Cyrus said there was ‘no f*cking way’ she’d watch the VMAs or perform this year because she was not nominated? Well, forget all that! It’s a new day! Miley is in the house and she’s looking like a stunner for her VMAs comeback. The now-divorced singer hit the 2019 MTV Video Music Awards stage for an emotional performance of her latest single, “Slide Away” — a song about her recent split with husband, Liam Hemsworth.

While onstage Miley remained poker-faced throughout the emotional performance. The song features lyrics describing how Miley has grown into her own person, separate from an old persona that some may expect her to still be. Right after she put down her mic, “Miley was incredibly emotional,” a source at the VMAs in Newark, New Jersey told HollywoodLife, EXCLUSIVELY. “She held onto the mic and hung her head for a few moments before being walked off stage.”

Ahead of her performance, Miley was spotted backstage with rumored girlfriend, Kaitlynn Carter — the now ex-wife of Brody Jenner. Cameras quickly caught Kaitlynn, a Malibu-based lifestyle blogger, helping Miley with her hair, just moments before the singer hit the stage to perform. 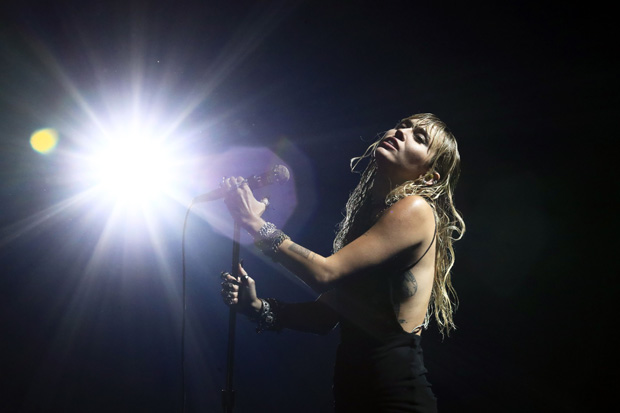 Miley debuted “Slide Away” just days after announcing that after one short year of marriage, she and longtime partner Liam Hemsworth were splitting for good. The lyrics of the song make it clear that the decision was not an easy one, making this particular performance an even more personal one for her. “Once upon a time it was made for us / Woke up one day, it had turned to dust / Baby, we were found, but now we’re lost / So it’s time to let it go,” Miley sings, echoing the sentiment she shared with her fans when she finally addressed the split on social media — and the accusations that she cheated on Liam.

“I can admit to a lot of things but I refuse to admit that my marriage ended because of cheating. Liam and I have been together for a decade. I’ve said it before & it remains true, I love Liam and always will,” she posted after the split and after she was spotted with kissing Brody Jenner’s ex wife Kaitlynn Carter on a yacht after separating. Perhaps this is just the first step in her moving on process.

Hey, it didn’t take her long to move passed not being nominated so she could perform tonight. Time heals all wounds.