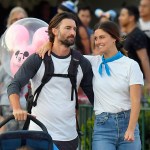 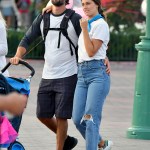 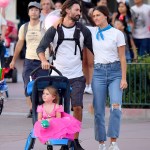 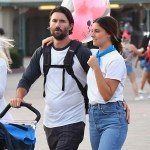 Brandon Jenner’s about to add two new members to the family band. Weeks after finalizing his divorce with Leah Jenner, Brandon announced that he and his new girlfriend, Cayley Stoker, are expecting twins!

“We are at 12 weeks now, so near the end of the first trimester,” Brandon Jenner, 38, told PEOPLE on Aug. 6 when announcing that he and his girlfriend, Cayley Stoker, are expecting twins. “We’re madly in love and we are very excited about this!” This will be the second time that Brandon’s become a father. He and his ex-wife, 36-year-old Leah Jenner (née Felder), share a daughter, Eva James, 3. After learning that Cayley was pregnant, they told Eva James that she was about to become a big sister – and she took the news well!

“We told her together,” Brandon told PEOPLE. “Leah, Cayley, and I sat down with her and told her what was happening, and she was very excited and happy. She’s super excited to be a big sister.” Yes, Leah was on hand to deliver the news, as Brandon told PEOPLE that he maintains a positive relationship with his ex-wife since their breakup. “Leah and I split up in a really beautiful way, and I think we handled it in the best way possible. It was a process, and it took some time to finalize. And now that Leah and I have moved on, I am starting a family with Cayley, and I’m so happy about it.”

Leah and Brandon called it quits in 2018 after six years of marriage. When announcing their split, the couple and former bandmates (they were in the indie-pop duo Brandon & Leah together) indicated that the split wasn’t acrimonious. “After celebrating 14 beautiful years together, we have lovingly come to the decision to end the romantic aspect of our relationship. We are deeply proud of the life we’ve cultivated together and are truly grateful for the bond of friendship we hold and cherish today. It is stronger than ever.”

Brandon’s announcement also comes a few weeks after he and Leah finalized the terms of their divorce. Brandon, according to court documents obtained by The Blast, will have to pay his ex $2,000 a month in spousal support through December 2021. On top of that, he’ll have to pay $2,000 a month in child support until Eva James is 18 years old. Brandon gets to keep the couple’s California home but will reportedly have to pay her over $500,000.

Expect Caitlyn Jenner, 69, to be one of the first people to celebrate Brandon’s new bundles of joy. “We’re closer than ever,” he told HollywoodLife when promoting his new solo EP, Plan On Feelings. Despite his brother, Brody Jenner, saying that Cait “was never really around” while growing up, Brandon told us that his relationship with Cait was “really good.”