Take note: Poses are pretty serious these days. Beauty influencer Amanda Ensing publicly accused Kylie Jenner of copying her pose in a recent photo on Instagram (SEEN HERE), and the Kylie Cosmetics CEO, 21, didn’t let it go unnoticed. And, Kylie sought inspiration from her big sis, Kim Kardashian in her epic response to Amanda’s claim. “From the words of Kim K ur not on my mood board but i did get my inspo off Pinterest 🤷🏻‍♀️,” Kylie replied to the YouTube star on Instagram.

Kylie, who’s currently on a “girls trip” in Turks and Caicos, shared a nude photo to Instagram on July 14, where she covered her private areas with her legs and arms, and wore nothing but an oversized straw hat. While most of the 79k comments were messages of praise and love for Kylie, Amanda’s comment read: “This photo looks awfully familiar 🧐😅”, in reference to a nude pic she shared (SEEN HERE) on June 17, that appeared similar to the youngest KarJenner’s. Amanda, who has 1.4 million followers on Instagram, clearly hinted that Kylie may have taken inspiration from her photo. Amanda has yet to reply to Kylie’s response.

Many fans were surprised over Kylie’s clap back, seeing as she’s in “vacation mode” with her best friends, Sofia Richie, Ariel Tejada, Victoria Villarroel and Anastasia (Stassie) Karanikolao, along with her daughter, Stormi Webster. The group boarded a pink and white private jet that read “Kylie Skin”, on Saturday, July 13, in celebration of the makeup mogul’s new Summer Collection. The new collection, which is set for release on July 22, includes coconut lotion, body scrub, and sunscreen. 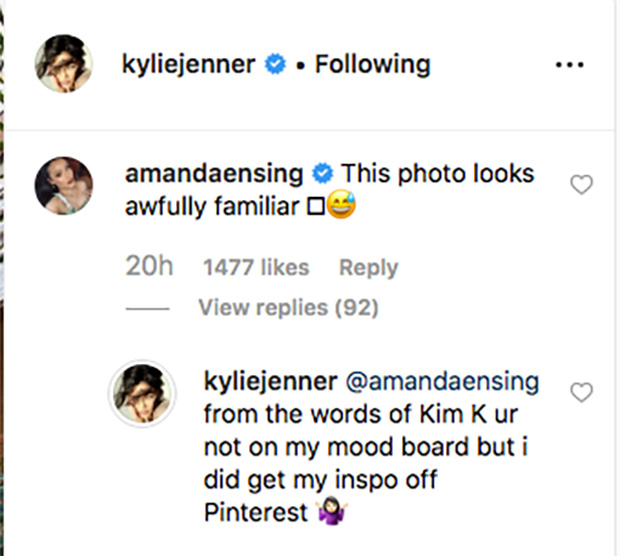 Kylie’s guests were treated to a ton of Kylie Skin merch and products as they boarded her private jet, and later on when they entered their mansion in Turks and Caicos. From custom water bottles, to pink and white towels, and products from the new collection — the mother of one made sure to accommodate her BFFs.