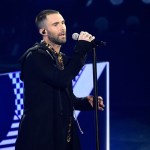 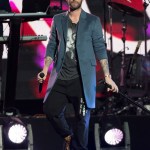 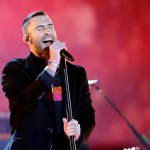 Adam Levine turned heads when he stepped out sporting a mohawk and a colorful wardrobe at the NBC Upfronts event in New York.

Adam Levine, is that you?! That’s what many fans were asking themselves when the 40-year-old singer recently showed up to the NBC Upfronts event in New York City and flaunted a total hair makeover. Adam shaved his brunette locks into a mohawk, which definitely transformed his entire look, and as he walked outside near the venue for the event, he couldn’t help but get attention. The Voice star wore a colorful wardrobe during his Big Apple appearance, including a graphic T-shirt under a multi-colored jacket and bright blue pants. Take a look at Adam’s new look below!

Adam’s hair transformation proves he’s not afraid to try new looks whenever he can. The Maroon 5 frontman is known for keeping either a short or shaved hair look most of the time so to see him with a mohawk is quite a fun occasion. His NBC Upfronts appearance isn’t the first time he’s showed off the new look though. Last month, he debuted a similar mohawk look on The Voice. The only difference was that the top of his hair was flatter than his recent hair change.

When Adam’s not making headlines for his hair, he’s continuing to lead with his successful career as a musician and a music competition judge. In Feb., he had one of the most memorable moments of his music career when Maroon 5 performed during the Super Bowl Halftime Show. The band performed many of their hit songs at the nationally televised event and made a lasting impression on football fans around the globe.

It’s always fun to see Adam sporting new looks. Whether it be his hair or his wardrobe, he always seems to know how to pull off just about anything!