It’s the first Monday in May, and you know what that means. Model Kendall Jenner graced the steps of the Metropolitan Museum Of Art wearing a bright orange feather gown for the 2019 Met Gala. Kendall’s look was super extra and extravagant — total Versace magic! Her gown featured epic orange fringe and a decolletage of orange feathers up her neck. “My dress has a lot of feathers so I almost tripped when I walked in!” Kendall exclaimed to E! on the carpet. “Getting inside and seeing everyone is so fun!” she added before Travis Scott and her sister Kylie Jenner interrupted the interview!

Kendall Jenner has had a way of modifying the theme to fit her muted style in years past. Last year, the model attended the fete with Off-White’s Virgil Abloh, wearing an off-the-shoulder white jumpsuit, featuring a train on each leg and sleeves that were gloves. The look was certainly glam on Kendall, but had nothing to do with the “Heavenly Bodies” theme. Plus, it instantly became a meme, with many comparing Kendall’s look to the bland Holy Communion bread! 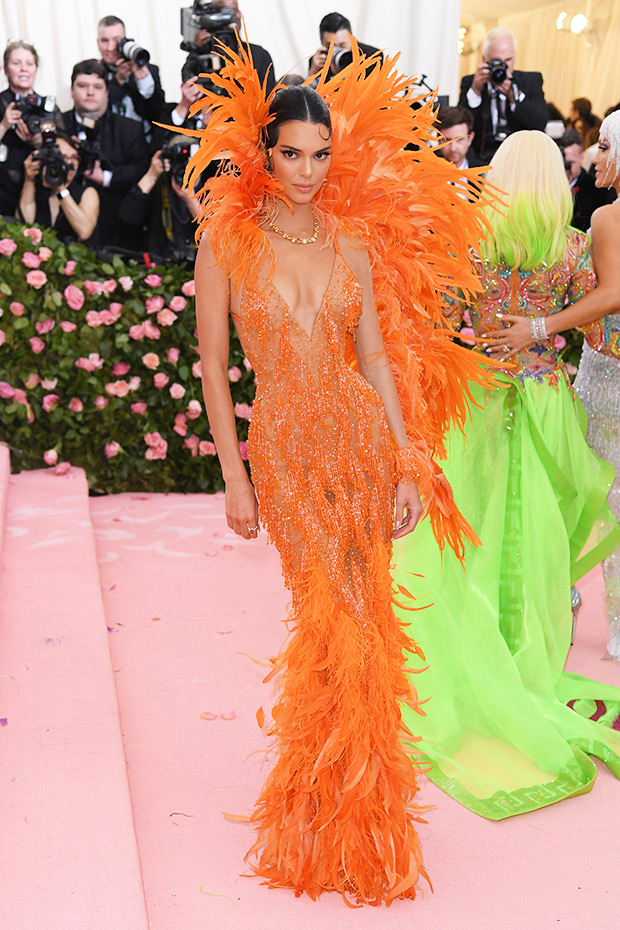 Then, in 2017, Kendall left little to imagination in her La Perla number that was basically Swarovski crystals and not much else. The Jenner sis showed off her booty in a lacy thong and, once again, avoided the Rei Kawakubo/Comme des Garçons theme. This year’s Camp theme was difficult to achieve, according to some insiders at Page Six. Camp: Notes On Fashion is inspired by Susan Sontag’s 1964 essay that defines camp as “love of the unnatural: of artifice and exaggeration.” So, think feathers, tulle and lots of exaggeration!

“We are going through an extreme camp moment, and it felt very relevant to the cultural conversation to look at what is often dismissed as empty frivolity but can be actually a very sophisticated and powerful political tool, especially for marginalized cultures,” Andrew Bolton, Costume Institute curator, told the New York Times.“Whether it’s pop camp, queer camp, high camp or political camp — Trump is a very camp figure — I think it’s very timely.”