Paris Hilton, 38, enlisted her bestie Kim Kardashian, 38, for her new music video, and they looked drop-dead-gorgeous while filming the clip in matching dresses. When photos from the May 2 video shoot surfaced, it appeared that the ladies slipped into strikingly similar dresses for the high-fashion shoot, and it’s hard to say who wore the look better. Paris’ dress was one-shouldered and featured a daring cut out on the left side. The slinky number sparkled bright in the sun and showed off Paris’ long, lean legs.

Kim’s number was incredibly similar but featured a halter neck design. It also dipped down deep on both sides exposing an ample amount of cleavage from the reality star. While Paris paired her look with sleek black heels, Kim opted to sport clear, mule style wedges. There was no denying that both these ladies were serving MAJOR looks on the set of the new music video!

While we have yet to receive details about the new visual from Paris herself, thanks to her friends on set, we can tell it’s shaping up to be one wild project. In addition to Kim K, celebs such as Larsa Pippen, Olivia Pierson, and Nicole Williams were spotted on set. While it’s yet to be confirmed, it looks like the video may pay tribute to Britney Spears! “Getting my ‘I Am A Slave For You’ On” Olivia wrote in one of her IG stories, which featured a massive boa constrictor snake. If Paris is indeed paying tribute to the pop music legend with her next single, we are so ready for this. 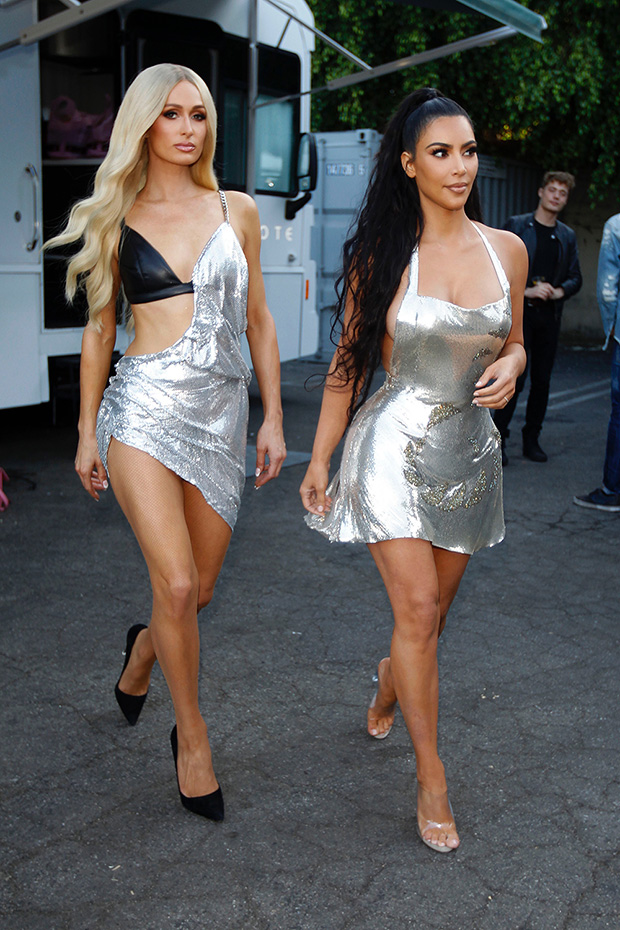 Paris was very cryptic when posting about the star-studded shoot. “#SecretProject with @KimKardashian. 🔥👸🏼👸🏻🔥 🎶,” she wrote on Instagram, before adding: “I can’t stop looking at my #BestFriendsAss🎶 🍑👀.” HollywoodLife will keep you posted once more details about the video shoot are revealed.