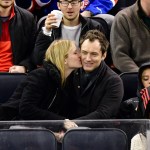 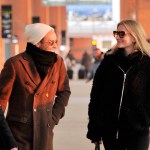 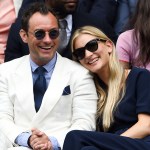 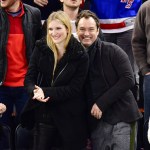 Jude Law is a married man! The hunky 46-year-old English actor got hitched to businesswoman Phillipa Coan, 32, who he met three years ago, in a surprise secret wedding ceremony at Old Marylebone Town Hall in central London on Apr. 30, according to The Sun. The lovebirds were seen outside the town hall dressed in their best for the nuptials with Jude in a dark blue corduroy suit and Phillipa in an off-white mini dress with ruffles in the front. The bride-to-be carried flowers as Jude helped her out of a black Range Rover before they walked up the steps to the town hall for the ceremony. An hour later, they came back outside flaunting wedding bands with huge smiles on their faces.

Jude’s new wife definitely has an impressive career like him. Although she’s not involved in the entertainment industry, the psychologist has her own company called Stride, which specializes in helping employees improve their performance, so it looks like Jude found a winner of a woman! Phillipa started dating Jude after they met in 2016 and speculation of their engagement started in Feb. 2019 after Phillipa was spotted out and about in North London wearing what appeared to be an engagement ring.

“The wedding itself will be a good old-fashioned knees-up with plenty of booze and dancing,” a source told The Sun, just days before Phillipa was seen with the ring. “Jude and Phillipa have been going out together for years and get on really well, so this is the next natural step.”

Before he married Phillipa, Jude was married to actress Sadie Frost, 53 from 1997-2003. They had three children together, including Rafferty, 22, Iris, 18, and Rudy, 16. He then dated actress Sienna Miller, who he starred with in the movie Alfie, and later he was reported to be in a relationship with model Samantha Burke. He had his fifth child, Ava, with musician Catherine Harding in 2015.