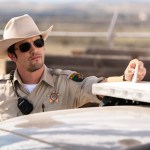 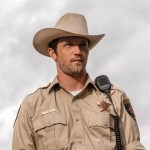 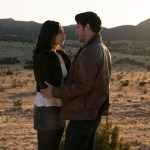 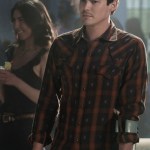 The ‘Roswell, New Mexico’ season finale has arrived and it’s going to be one to remember. HL spoke EXCLUSIVELY with Michael Vlamis about Michael Guerin’s complicated relationship with Alex, the Maria of it all, and more.

Michael Guerin has had a hell of a season. In the penultimate episode of Roswell, New Mexico’s first season, Michael came face-to-face with his mother in a prison filled with elderly aliens who survived the 1947 crash. Michael attempted to help his mother escape, but he only breached the quarantine. Michael tried to force Alex to leave the prison before it exploded by telling Alex that he doesn’t love him, but Alex refused to move. Michael and Alex’s relationship has stolen fans’ hearts this season. But Michael has also developed feelings for Maria DeLuca this season. HollywoodLife spoke EXCLUSIVELY with Michael Vlamis about whether or not Michael will make a decision between Alex and Maria in the season finale, airing April 23 on The CW. “I don’t know if he’s making a decision, but you’ll see where he’s leaning right now,” Vlamis said.

Michael’s relationships with Alex and Maria are polar opposites. Malex’s relationship spans a decade and is rooted in complications and a few painful memories. Does Vlamis think Malex can ultimately get past the baggage? “The hopeless romantic in me says you can get past anything, but as I experience more relationships in my life, it’s funny what kind of resentment we hold and what actions from our partners will trigger old memories that you thought you got rid of,” Vlamis continued. “So while I’d like to say yes, it’s very, very difficult. But as a hopeless romantic, I think I do believe that love always prevails.”

As for what’s next after that pivotal scene in the Cauffield prison, Vlamis teased: “I will say that I think in that scene it’s pretty clear that they both have super strong feelings for one another, right? But at the same time, the timing might be off for them, or it might be on. I don’t know. I can’t give that away. But all I can say is, you know how they feel about one another and they have decisions to make going forward. It’s funny, it’s that reversal, right? No longer does the Alex character walk away from Michael Guerin. He’s there facing the problem. Literally, a building is going to explode, and he’s still there for him. And I think that shows a lot of the growth of the relationship over the season. So I can’t say anything else without giving away what’s going to happen.”

Even though the Malex fandom is strong, Michael noted that his character’s feelings for Maria are very real. “I think they’re very real. I think they’ve had feelings for each other for a long time and both are way too stubborn to let one another know,” Vlamis said. “And I think that it’s something that was in Michael Guerin and it came out at a time when he felt a little bit of relief from Alex. I know that sometimes I haven’t been able to get over someone unless I met someone else that inspired me, or got me excited, or was just not like filling a void, but somebody that maybe you can love just as much as you love the person before. I think he has found that in Maria. So it’s a really tough situation because it’s not like Alex is completely gone. So he’s just gotta figure that out, but I do think that love is real.” He also added: “I’m not ruling either relationship out, and I’m not saying one or the other is endgame just yet. We have a long ride to go.”

At the end of the episode, Michael is determined to get answers about his past after seeing what happened to his mother and the other aliens at Cauffield. “He is just a madman looking for answers and is going to do anything it takes to find out the truth because that’s all he’s wanted for so long,” Vlamis said. This puts him at odds with his brother Max since Noah, the fourth alien, is the only person who can provide the answers Michael is looking for. “He’s not going to stop until he gets those answers. And whatever Max is going to do to get in his way, he’s going to do, but there’s a little showdown, so be ready for the showdown.”