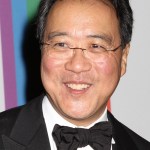 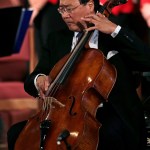 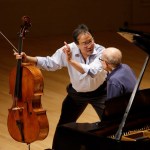 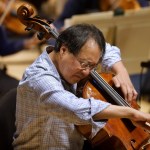 World-renowned cellist Yo-Yo Ma made headlines on Apr. 13, when he peacefully and beautifully played his cello for his Bach Project, in a park next to the Juarez-Lincoln International Bridge, one of the bridges that connects the U.S. and Mexico, and encouraged cultural connection.

Yo-Yo Ma, 63, believes in building “bridges, not walls”, when it comes to the connection between the United States and Mexico, and he proved just that by doing what he does best: playing his cello. The incredibly talented cellist took his Bach Project to the Jaurez-Lincoln International Bridge between the neighboring cities of Laredo, Texas and Nuevo Laredo, Mexico for Laredo’s “Day of Action” on Apr. 13, and encouraged others to close the divide between the two countries by performing Bach’s music.

Ma played Johann Sebastian Bach‘s Suite No. 1 for Unaccompanied Cello in a park near the bridge on a concert stage as onlookers watched and in between his playing, in both cities, he made a speech about how he feels communities should come together, which is what his Bach Project is about, instead of separating. His peaceful protest comes in the midst of President Donald Trump,’s controversial plans to build a wall between the border of the U.S. and Mexico to prevent illegal immigration in the states.

“As you all know, as you did and do and will do, in culture, we build bridges, not walls,” Ma said while on stage in the park. “I’ve lived my life at the borders. Between cultures. Between disciplines. Between musics. Between generations. A country is not a hotel and it’s not full.” Ma was awarded the key to the city of Laredo by its Mayor Pete Saenz at the event for his achievements in music and in helping communities come together. Here are five things you should know about the experienced musician making a difference.

1.) He is Chinese-American and was born in Paris. He attended school in New York and started playing music at just four-years-old. He went on to graduate from Julliard School and Harvard University before really gaining traction with his music career.

2.) His highly successful career has allowed him to perform with many orchestras throughout the years. As of Apr. 2019, Ma has recorded 90 albums and won 19 Grammy Awards for his work in classical music.

3.) In addition to music, he has been an advocate for world peace. He has been named a United Nations Messenger of Peace since 2006 and won the prestigious Presidential Medal of Freedom, the highest civilian award in the U.S., in 2011. He also won the National Medal of Arts in 2001.

“In cultures—we build bridges, not walls”

“A country is not a hotel, and it’s not full”

4.) He served on one of President Barack Obama’s committees. Ma, who performed in front of President Ronald Reagan at the White House in Oct. 1987, was appointed to President Obama’s Committee on the Arts and Humanities in 2009.

5.) He started his own non-profit arts organization, the Silkroad, in 1998. The organization promotes collaborations between artists and institutions and multicultural artistic exchange. It was inspired by the traditions of the Eurasian Silk Road trade routes that connected the East and the West.