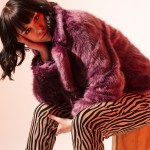 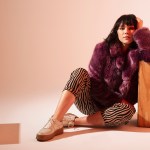 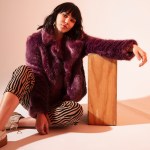 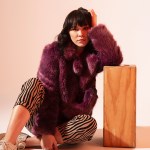 UPSAHL’s ‘Drugs’ music video is a glitter-filled fantasy & she sat down to tell us about filming the clip, touring with Max Frost, & why Gwen Stefani was the badass inspiration she needed as a teen.

UPSAHL is a new kind of pop star. Yes, her songs are undeniably catchy, but in place of on-stage dance moves she holds a guitar, and while she has an affinity for bright colors, her music is far from bubble gum pop. There’s a substance to UPSAHL’s music that shines through the sugary sweet vocals, and it’s not surprising to hear that she cites Weezer and The Shins as her earliest influences – to name a few. The indie pop star on the rise is sure to impress when she plays Lollapalooza 2019, where she will presumably play the hits she penned for her brand new EP, Hindsight 20/20. The Arista Records signee whipped out her best work yet for the collection of songs, which elicit a sound akin to Gwen Stefani, a long-time hero for the singer. While UPSAHL, AKA Taylor Upsahl, is still getting started, she’s got a lot of say about life, love, and the power of being a female artist right now.

Do you think growing up in a musical family influenced your decision to become a musician yourself?

UPSAHL: Yes. Growing up, my dad was playing in punk bands and stuff from the time he was in high school until I was born. So, I was kind of surrounded by music. We had a band room in the house, and whenever bands would be going on tour, and they would stop through Phoenix and would crash in my living room. I was practically born into it.

UPSAHL: “Drugs” for me was like one of those songs… I’d been writing this whole past year, like everyday, with new people and “Drugs” was a song where I was just the most proud of a song that I’d ever been. It was the one song where I could show it to anyone, regardless of whatever, and if they didn’t like it, I could be like, ‘no, you’re wrong.’

Can you tell me about making the video?

UPSAHL: I worked with this amazing director. His name is Patrick Lawler and he came up with this whole idea of having the glitter, and having everything being really shiny and colorful and he was really cool about being very collaborative. It was the easiest photo/video shoot ever.

When you were pulling songs together for an EP, what vibe were you aiming for?

UPSAHL: I guess like as an artist, it’s important for me to make people feel just like inspired and empowered and kind of just feel like a baller ass bitch, I guess, I don’t know, like, so with the song “All My Friends are Rich,” embracing the fact that you’re broke, and just being like, ‘where in the hell is my money?’ and it was like very positive and playful, and then with “Smarty,” which is like send me all the roses that you want, telling that one douche lord in your life like to f**k off. It’s empowering as a woman.

How did you link up with Max Frost for tour?

UPSAHL: So, I had met Max a few years ago, we did a session together, and wrote my first two singles and then we just kept in touch ever since, he’s become like a big brother to me. He’s like such a mentor, and when he decided he’s going on tour, he was like, ‘come open for me!’

Who inspired you musically aside from your family?

UPSAHL: I grew up listening to a bunch of alternative and rock music, I love Weezer and Spoon and The Shins. In middle school and high school, I started to love Lorde and like a lot of bad ass female artists, No Doubt and Gwen Stefani was like a massive inspiration for me. And I’m also just so thankful that I had a person like Gwen Stefani who’s just bad ass like powerhouse of a woman, who just does whatever she wants. As a young girl, that was so cool to be able to look up to.