In a room full of Hollywood royalty, one queen stood above them all, and her name was Shangela Laquifa Wadley. The drag queen, beloved by millions of RuPaul’s Drag Race fans, stole the show at the 2019 GLAAD Media Awards on March 28, according to Entertainment Weekly, performing a 7-minute medley of Beyoncé tunes in front of the actual Beyonce! Both Bey, 37, and her husband, JAY-Z, 49, were on hand to receive the Vanguard Award, but seeing Shangela do a flawless lip-sync number to tracks like “Partition” and “***Flawless” was the true honor.

“I’m just super honored and overwhelmed. I’ve already cried. “I put a run in my stocking from Shangela,” Beyoncé told the audience after she and the rest of the audience gave the queen a standing ovation. However, if the name Shangela seems familiar, there’s a good reason, as this queen has been growing a bigger mainstream following as of late. If you’re still asking “who is Shangela?”, this is what you need to know:

1. Shangela is a drag queen from Paris, Texas. Shangela may be one of the brightest stars in Los Angeles, but the man behind the queen was born in Paris, Texas. Darius Jeremy Peirce, 37, grew up in the Lone Star State and, per her bio on her website, graduated with honors from Southern Methodist University. But, Texas wasn’t big enough to hold her ambition.

“My dream was always to come to Los Angeles and make it as an actor,” she told V magazine in 2018. “I kind of just fell into drag. Since RuPaul’s Drag Race Season 3, I’ve been working my way up, doing guest spots on shows like Glee, 2 Broke Girls, and Community. Honey, I beat down an alien with my purse in the X Files.”

Related: Big Freedia: 5 Things To Know About The Guest Vocalist On Beyoncé’s ‘Break My Soul’ 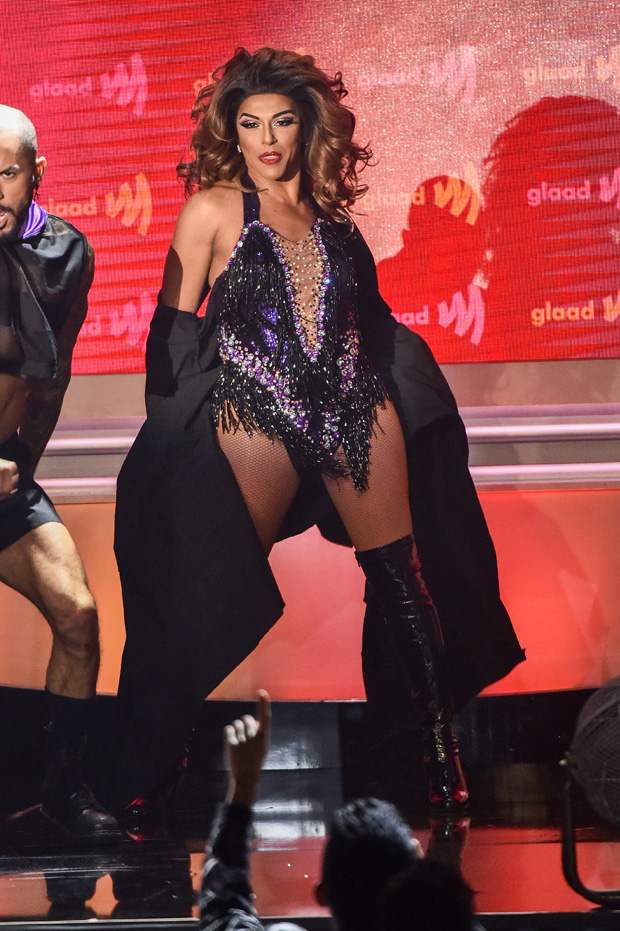 2. She appeared in A Star Is Born… Shangela acted alongside Lady Gaga and Bradley Cooper in the 2018 version of A Star is Born, performing as the emcee at a drag bar. “It’s a really funny story how I landed on this. The original role was for a Marilyn Monroe drag impersonator who was half a zombie,” she told Billboard. “And when my agent brought it to me, I was like, ‘You know, honey, I could put on all the blonde wigs all day, but if they’re going for a spot-on Marilyn Monroe, I don’t think Marilyn Monroe is a lady of color, no matter how long she’s been out in the sun.’ ”

Ultimately, it was Gaga – who Shangela worked with on her “Applause” lyric video – pressed Shangela to audition. “And I’m like, ‘Oh, honey, if LG calls, lemme get my white dress and my blonde wig and I’m going out!’ [Laughs] And I seriously did. I went in to audition.”

3. …but she’s he is best known for appearing on RuPaul’s Drag Race… The world – or, at least, the part that was watching LOGO in 2010 – was introduced to Shangela when she joined season 2 of RuPaul’s Drag Race. Unfortunately, her tenure on the season didn’t last long, as she was eliminated in the first episode over her lack of experience (she was doing drag for about a year or two at that point) and poor sewing. She returned for Season 3 by popping out of a giant pink box. Boxes would become a staple of her brand…

4. …even though she hasn’t won a season. Third time’s the charm? After being eliminated on the first episode of Season 2 and making it to the top 5 of Season 3, Shangela returned to Drag Race for the third season of RuPaul’s Drag Race: All-Stars. While she was heavily favored to win the season, a jury of her peers – the queens eliminated in the season – did not vote her in the Top 2 finalists. Trixie Mattel eventually won, and Shangela took the loss in stride.

“The best way to move forward is to do just that: move forward with love and light,” she told Entertainment Weekly. And please, keep sending me these lovely messages. I need them and I appreciate them. I was also disappointed [by not winning], but the only thing you can control in life — even when the rules change — is how you react. And the way that I’m reacting is to stay motivated. Trust me, honey, I will never give up.

5. She’s behind one of the most memorable lines in Drag Race history. Shangela has released music, appeared in multiple films (R.I.P.D. Hurricane Bianca, etc.) and television shows. She’s also a performer who has traveled the world, appearing on stages to entertain her legions of fans. Yet, she might go down in history for the rant she gave during one heated moment in Untucked, the DragRace after show that includes some behind-the-scenes footage.

When queen Mimi Imfurst made an offhanded remark about Shangela having a “sugar daddy,” the queen went off. “I don’t have a sugar daddy,” Shangela said. “I’ve never had a sugar daddy. If I wanted a sugar daddy, yes, I could probably go out and get one, because I am what?? Sickening. You could never have a sugar daddy because ‘you are not that kind of girl.’ Baby, everything I have I have worked for and gotten myself. I have built myself from the ground up.” Cue a tossed drink and, according to Out, an alleged fistfight, and there you go: Drag Race “her-story.”