T.I.and Tiny’s family hustle is hard! The hip hop couple made it family night out at the Kids Choice Awards in LA on March 23, and the photos are too cute. Tiny coordinated outfits with her youngest child, Heiress. The mother-daughter duo rocked matching Fendi tops!

T.I., 38, and Tameka ‘Tiny’ Harris, 43, turned the Kids Choice Awards into family night when they took their kids to annual show in LA on March 23. The rapper and Xscape singer posed on the red carpet with their kids, Clifford ‘King’ Joseph Harris III, 14, Heiress Diana Harris, 2, and Major Philant Harris, 10. The Harris family seemed to coordinate in all black outfits. Tiny and her youngest baby, Heiress, who turns three on March 26, matched in brown and black Fendi tops.

Tip, who was recently honored by Georgia state for his positive impact in the community, kept that same energy when he addressed online bullies who wrote negative comments about Tiny’s KCA’s look on his Instagram. After the rapper posted a series of photos of his family from the red carpet, he admitted that the comments about his wife really got to him. “Ok, maybe this is a teachable moment… What do y’all really hope to achieve by coming on my page speaking ill of my wife under a picture of my family????”, Tip wrote in part, alongside a photo of him with Tiny and their 2-year-old daughter, Heiress.

T.I. continued: “WTF make y’all think I’m just gon let y’all Try ME & MINES???? I’m showing restraint because y’all are young black women and IM TRYING MY BEST to respect you and uplift you like you ALL DESERVE. But YALL GOT ME F–KED UP SHAWTY… Be out here shaped like a whole 2liter Peach Faygo and got the nerve to make critical, disrespectful comments about MINES?!?! I obviously love it and have loved it for over 18yrs now… IF YOU HAD A MAN WHO LOVED YOU AS MUCH AS I LOVE HER I doubt you’d be miserable enough to leave such hateful comments. Let’s not have this discussion again… Now Get a Life witcha goofy asses”. 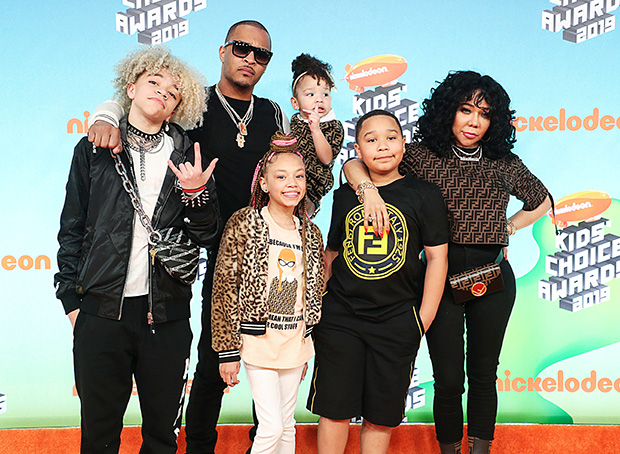 While the Harris family took over the KCA’s, not every member of the H-squad was present. Tip’s two sons, Messiah Ya’Majesty Harris, 19, and Domani Uriah Harris, 18, along with his daughter, Deyjah Imani Harris, 17, from previous relationships, were not at the annual show. Tiny’s 23-year-old daughter, Zonnique Jailee Pullins, also from a previous relationship, was not there, either. You can see more of the Harris family when their hit reality show, T.I. & Tiny: The Family Hustle, returns for its second season on Vh1 on Monday, April 15 at 9 PM.

The 2019 KCA’s went off without a hitch on Saturday, with big names in attendance including, Migos, who performed a medley of hits, Chris Pratt, who was slimed as he took home the award for favorite butt-kicker, and DJ Khaled, who hosted the show. Although she is currently on tour, Ariana Grande surprised viewers with a video, where she thanked her fans after she won awards for best song (“thank u, next”) and favorite female artist.