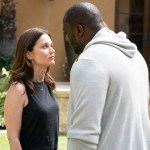 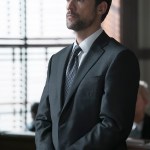 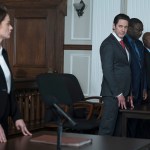 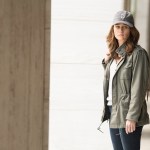 Robin Tunney and Adewale Akinnuoye-Agbaje star in the brand-new legal drama ‘The Fix.’ The stars told HL EXCLUSIVELY that we will learn whether or not Sevvy Johnson is a murderer by the end of the season.

The Fix follows L.A. district attorney Maya Travis, played by Robin Tunney, who prosecutes A-list movie star Sevvy Johnson, played by Adewale Akinnuoye-Agbaje, in a high-profile double murder case. When she’s defeated, Maya flees for rural Washington. Eight years later, she’s lured back to Los Angeles when Sevvy is under suspicion for another murder. The show is inspired by Marcia Clark’s real-life experiences, and there are similarities to the infamous O.J. Simpson case that Marcia served as the prosecutor on. HollywoodLife sat down EXCLUSIVELY with Robin and Adewale at the Television Critics Association winter press tour to talk about the show. Even though you’ll see the show does mirror real-life in some ways, The Fix is going in its own direction.

“It’s sort of a fictionalized version. I have Marcia’s origin stories, but it’s a very different character,” Robin told HollywoodLife. “Marcia’s been married 3 times, has 2 kids. Maya’s not a mother. She’s unmarried, but it was wonderful to be able to have this creator who actually had this backstory and so much knowledge of how things felt and what the minutiae was involved in prosecuting a case and the defense. I think that’s what’s original about this show. You see how both sides work. Because it’s one case you also get the human side of every character.”

Like with the O.J. case, you will be asking yourself throughout The Fix’s 10-episode run: did Sevvy do it? Thankfully, this mystery is not going to be dragged out over seasons. “We don’t leave you hanging,” Adewale revealed. Robin also added, “There is closure.”

The show will really play upon the tension that’s been built up in the past between Maya and Sevvy, as well as the new tension because of the recent murder. However, Maya and Sevvy won’t be sharing the same scene constantly, and that’s part of the magic of The Fix. “We vicariously interact,” Adewale teased. “We talk about each other a lot, which I think really helps build the tension when we actually do come together. There are some wonderful scenes I think because we don’t just come together as foes. There’s an opportunity for each of us to actually appeal to each other.” The Fix airs Mondays at 10 p.m. on ABC.