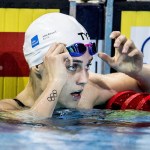 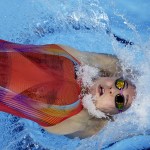 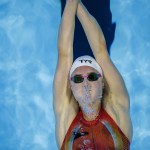 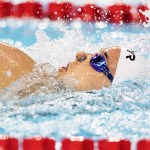 Did Zac Efron just score a gold medal in love? The ‘Neighbors’ star is reportedly dating Sarah Bro, so get all the details on the Olympic swimmer that supposedly captured his heart.

Is Troy boo’d up with a Bro? Possibly. Zac Efron, 31, and Sarah Bro, 23, sparked romance rumors when they were first spotted together at an LA fitness class in January, according to Us Weekly. After the two of them were spotted sitting side-by-side at UFC 235 in Las Vegas on March 2, multiple outlets now report that these two are an item! Zac – who is recovering after tearing his ACL while skiing – was last romantically linked to Alexandra Daddario, though she said they were “just friends.” So, who exactly is this new woman in The Greatest Showman star’s life?

1. She’s from Denmark. Zac Efron’s reportedly new girlfriend in a European import. The 23-year-old has been training at the University of Southern California since November, according to a post on her Instagram page. Yet, she’s a product of Denmark and competed with the Danish women’s swimming team during the most recent summer Olympic games.

2. She’s yet to win an Olympic medal. So far, Sarah’s biggest accomplishment inside the pool is the bronze medal she won while competing in the 4×50 freestyle the 2014 World Championships, according to Heavy.com. She’s a “multiple medal winner” in relay events, and competed at Rio 2016 in the women’s 4×100 meter freestyle relay. Denmark finished 12 out of 16, with Australia taking the gold, the US finishing second and Canada coming in third.

3. Swimming is not her end goal. “I am a social science student from STX – but my dream is to become a doctor,” Sarah said in a Google-translated interview with Kvindesport.dk. “I raise my mathematics, chemistry, and physics on self-study at VUC, and this summer I will apply for medical studies.” When asked what she wanted to do, post-swimming career, she reiterated that her big dream “is to become a doctor.”

4. She loves Beyonce, Sex and the City and sushi. Sarah Bro sounds like an all-American woman, even though she’s from Nørrebro. She says R&B and hip-hop are her favorite genres of music. “I love Beyonce, Post Malone, Drake, Frank Ocean. And then I love to [sing to/rap on] old classics,” she told Kvindespot.dk. When asked what she enjoys watching in her downtime, she said, “Sex and the City, Gossip Girl, New Girl. Game of Thrones! But to be honest, I think I have seen almost every series on Netflix.” As to what she likes to eat while binge-watching Netflix? “Sushi, Pizza and everything my mom does.”

5. Baywatch may have brought them together? Neither has confirmed their rumored romance, so it’s unclear what or who connected these two together. However, they have something in common: a love of Baywatch. Sarah was spotted attending the Danish premiere of Zac’s 2017 film adaptation of the beloved 90s show. Zac wasn’t there – and she wasn’t at the Los Angeles premiere – but that’s a fun fact that probably got them talking.