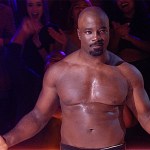 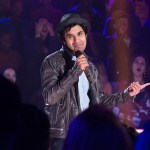 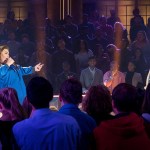 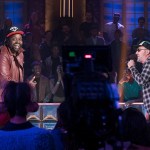 Mike Colter is going all-out in his ‘Drop The Mic’ battle against Ne-Yo! In this EXCLUSIVE preview, the ‘Luke Cage’ star rips off his shirt during their epic rap battle. Watch now!

Mike Colter and Ne-Yo go head-to-head on the Feb. 20 episode of Drop The Mic, and this face-off is a classic. Ne-Yo starts off the rap battle and throws all the shade at the Luke Cage hunk. He calls Mike a “D-list Terry Crews!” The singer doesn’t stop there. “Even as a superhero you was an amateur… Let’s hope for your sake Wakanda needs a janitor.” Did you feel that burn? Because we did! Even though Ne-Yo has a broken foot, he’s not going to let that stop him from showing off his moves. He spins around with his boot on in front of Mike!

Mike’s not going to take Ne-Yo’s rap sitting down. He wastes no time clapping back at the singer with his own rap. “You look like the ugly older brother of Jimmy Butler,” Mike says. “I’ll admit those dance moves, they were pretty sick, but you ain’t gotta dance bruh when you look like this…” That’s when Mike takes the battle to a whole new level by ripping off his shirt! A shirtless Mike Colter? Yes, please! Needless to say, Drop the Mic hosts Hailey Bieber and Method Man are SHOOK. Ne-Yo’s got to be shaking in his boot!

Drop the Mic season 2 has featured some incredible celebs so far. Charli XCX, Tove Lo, T-Pain, Lonzo Ball, Shameik Moore, Laila Ali, Kat Graham, WWE superstars, and more stars have hit the stage this season. We can’t wait to see what the show has in store! The all-new episode of the show will air Feb. 20 at 10 p.m. ET on TNT and encore the following night on TBS.