Look, everyone knew this was how it was going to go: Rob Gronkowski, 29, fresh off winning his third super bowl (and, possibly, his last), was on hand for the New England Patriots’ victory parade on Feb. 5. So was his hot girlfriend, Camille Kostek, 26, who rode on top a duck boat with her hunk of a bae. While Gronk started the day out fully clothed, no expected that to last long. In fact, before you could say “Gronkowski,” Rob had shed his shirt, cracked a beer, and started to have the time of his life. During the celebration, he and Camille – who was having just as much fun as her boyfriend – got a little hot and heavy, thanks to some sexy grinding from Gronkowski. Gronk’s gonna Gronk, and it seems he found a woman who’ll meet him tit-for-tat.

Camille and Gronk did their best Olivia Culpo-Danny Amendola impression after the 2019 Super Bowl ended. Following the conclusion of the Feb. 3 game, Camille planted a kiss on Gronk’s lips and the moment was captured for the ‘gram. If there was any question why Camille was the woman to tame the notoriously rowdy Gronk, just clock the caption she attached to the pic: “Tastes like a champion.” Yes, it seems she gets Gronk. Prior to the game, she posted a black and white photo (per the New York Post) of the pair with an encouraging message. “Can’t express how proud I am of this guy. Now LFG #SUPERBOWL53.”

How did this love begin? Camille is a former Patriots cheerleader, per For The Win, who was with the squad from 2013 to 2015. Since leaving, she’s become a Sports Illustrated model, and these two have been in a relationship since 2015. “Rob and I have been seeing each other. We’re both super busy right now. Obviously he does a lot and I do a lot,” she said, per Bustle. So, these two have been low-key together for nearly four years now. To be fair to Rob and Camille, it’s not like they’re hiding it – it’s just that all eyes are usually on Tom Brady and Gisele Bündchen when it comes to Patriots’ relationships. 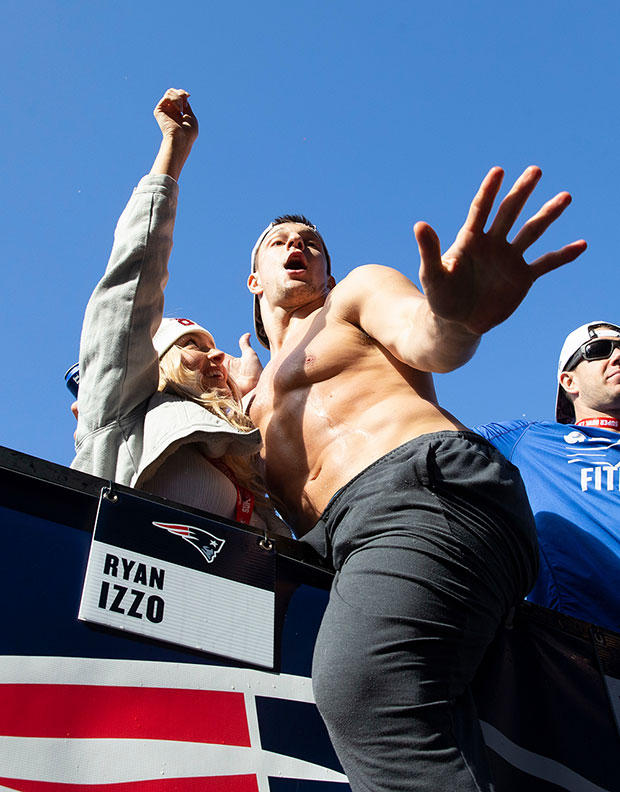 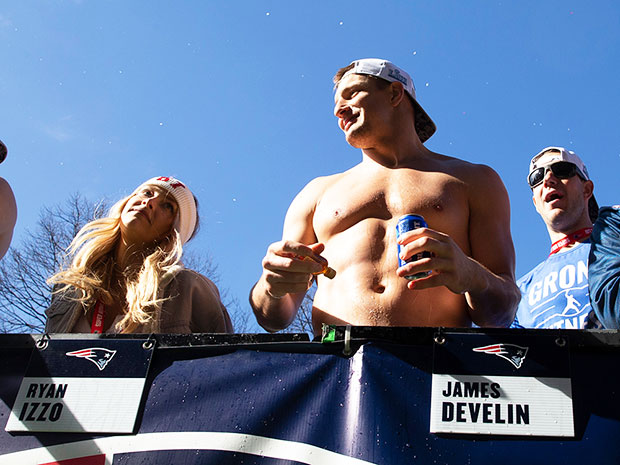 Will Camille get another chance to taste a “champion?” Rob turns 30 in May, and while Tom has pledged to play until he’s 45, Gronk may not have that luxury. He’s undergone a number of back and ankle injuries, per the Washington Post, and his injuries have made him consider hanging it all up. “You’re just trying to get some answers over here, baby, but like I said I don’t know,” he said during the NFL’s Open Night media extravaganza. “I haven’t done that sit-down yet. I gotta do that sit-down. About two weeks after [the season], then I’ll know.” Some think he’s hinted in a Brady Instagram video that he’s not done – so we’ll have to see.