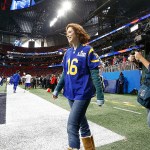 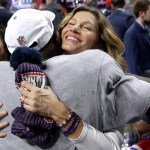 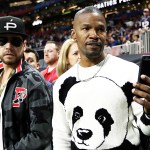 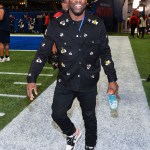 Let’s face it. The Super Bowl isn’t just about which team wins the game. It’s also about celeb spotting and we’ve got pics of some of your fave stars watching the event this year.

Ever since it was announced that Travis Scott, 26, would be performing at Super Bowl 53 alongside Maroon 5 it was obvious that this year’s big game would be an especially glitzy affair. Fans and the media alike quickly speculated that the Kar-Jenners would be there in full force to support Kylie Jenner’s man. (In the end they didn’t all make it down to Atlanta. Kim Kardashian, 38, and Kanye West, 41, stayed at home in Los Angeles.) But, who else would be there? Well, the big day has finally arrived and we have pics of your fave celebs taking it all in.

Actor Jamie Foxx, 51, was one of the first stars to be spotted at the game. So too was mixed martial artist star Conor McGregor. The 30-year-old Irishman made a colorful appearance with his son, Conor Jr., 1. Father and son wore matching lilac jackets and looked absolutely adorable. Kevin Hart, 39, took to the field before the kickoff on Feb. 3. Meanwhile, thousands of Americans watched soul legend Gladys Knight, 74, sing the national anthem. Surprisingly, Kylie’s ex Tyga, 29, was in the crowd watching the Los Angeles Rams and the New England Patriots duke it out on the field. He shared a photo of himself on Instagram, with the caption, “Let’s f*cking Go!!!” Actress Sarah Michelle Gellar, 41, also took to Instagram to share a photo of herself in the stands. She captioned her selfie with, “Did I mention go @rams (I know hate coming!!).”

Anytime that the Patriots are in the Super Bowl it’s a given that Tom Brady’s supermodel wife Gisele Bundchen, 38, will make an appearance to cheer on her hubby. She posted a photo of herself with the football legend at the stadium the day before kickoff. Meanwhile, Bachelor In Paradise alum Wells Adams, 34, shared an Instagram video of him and his Modern Family star girlfriend Sarah Hyland, 28, taking their seats before the Feb. 3 Super Bowl began. Looking around the mostly empty venue, he joked, “We got to the Super Bowl way too early.”

As sports fans and celebrity watchers know, the Super Bowl is always a magnet for famous people. In 2018 the list of stars in Minneapolis, Minnesota to watch the Philadelphia Eagles and the New England Patriots battle it out was like a who’s who of Hollywood. Jennifer Lopez and her boo Alex Rodriguez? Check. Gwen Stefani and Blake Shelton? Yep. Philly native Bradley Cooper was front and center too. Obviously, Justin Timberlake and his wife Jessica Biel were both taking in the game, because the singer was the halftime performer. Former vice president Joe Biden (also a Pennsylvania native) was on hand to cheer his team. Tiffany Haddish braved the cold to watch the game as well. Clearly 2019 has also been a star-studded affair. Would you want it any other way?