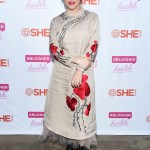 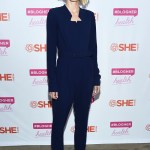 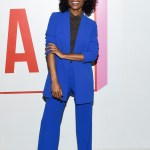 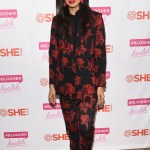 Alyssa Milano’s husband received death threats after she recently tweeted that the MAGA hat is the new ‘white hood’, but she told HollywoodLife in an interview at the BlogHer Health Summit, that she will not apologize. Here’s why.

When actress and activist, Alyssa Milano, watched videos of a group of MAGA- hatted boys from Covington Catholic High School, surrounding a Native American man in front of the Capital in Washington, D.C., on Jan 18, she was so disturbed that she took to Twitter to  pronounce that ‘The red MAGA hat is the new white hood. Without white boys being able to empathize with other people, humanity will continue to destroy itself.’

Her tweet set off such a huge reaction both from those who agreed and those who didn’t — that she wrote an opinion piece for The Wrap on January 23rd, explaining why she refused to apologize to the Covington students or anyone else wearing those hats. And when she appeared at the BlogHer Health summit in LA a couple days later, as the keynote speaker, she proudly stood by her words, when asked about them by HollywoodLife.

“I just feel it’s true, If I thought it was sensational or over the top, I would have had a reason to back down,” she said. “We often see those red hats in our country during instances of racism and misogyny. I have yet to see someone volunteering in a Make America Great Again hat. They’ve become a symbol of hurtful, hurtful policy. I think that if Republicans don’t believe in while nationalism, they should take them off. The hats are signaling a belief in a certain ideology that is racist and sexist.”

The red MAGA hat is the new white hood.

Without white boys being able to empathize with other people, humanity will continue to destroy itself. #FirstThoughtsWhenIWakeUp

The former star of Charmed, admitted that she hasn’t watched the Charmed reboot, and that’s not surprising, considering how busy she’s been as a political and social activist, campaigning for candidates she has supported, for progressive issues and just this week, for the passing of the Equal Rights Amendment to the Constitution. “As white women, if we’re not going to fight for every woman, including disenfranchised women and women of color, we aren’t going to get this done,” she told the crowd of 1,000 women at the BlogHer Summit, just days before going to Capitol Hill.

Milano, along with Patricia Arquette later spoke to lawmakers on January 30th about the importance of ratifying the Equal Rights Amendment, which guarantees equal rights for women in the Constitution. “My name is Alyssa Milano and in 2019 I do not have equal rights in the Constitution,” she said in a press conference during her visit to the Capital. “That’s right, because I have a vagina I do not have equality and justice.”

Milano spoke out equally forcefully in her interview at BlogHer. “We’re fighting for equal rights, not to be better than men… but so hopefully future generations of women won’t be starting from behind and will be able to rise so much faster.” She used her keynote to talk about how deeply she’s concerned by the federal government and many states trying to roll back reproductive rights. “They are trying to take away access to birth control and access to abortion, so do they not want women to have sex. Do they want to take sexual pleasure away from women?,” she asked. She also explained why she refused to call anyone ‘pro life,’ because we are all pro life… These governments are trying to take away choice so I call them ‘anti choice.'”

Now, while the mom of two young children, Elizabella Bugliari, 4, and Milo Bugliari, 7, insists that she won’t be running for office herself in the foreseeable future, she did reveal that activism would become a bigger and bigger focus of her life — “This is such a huge part of where I am. This is a part of my natural progression. And who wants to grow old in the entertainment industry. Who wants them to have to bring in the filters.”

So who does Alyssa Milano see herself supporting in the 2020 presidential race against Donald Trump. “It will come down to how they perform in the debates. It’s not about their variations in policy. I will support whoever will beat Trump,” Milano told HollywoodLife in our interview. “That is, if he isn’t out of there by then. I think it’s a different story if it’s Pence by then. I think a lot of the democratic candidates can beat Pence… but has anyone asked the question of how Pence will run the country if he can’t take any meetings with women one on one? Hmm.”

To learn more about the campaign to pass the ERA (Equal Rights Amendment), click here.