Apparently female celebrities aren’t able to eat a meal without fans calling them out for having a baby bump. Tiffany Haddish had to clap back at a rude fan that she wasn’t pregnant and ‘just getting fat.’

It’s become an epidemic with fans openly asking female celebrities if they’re pregnant if they have anything less than a perfectly tight tummy. The latest victim of invasive baby-bump questions is Tiffany Haddish, as she wore a figure hugging Michael Kors white gown to a Golden Globes after party on Jan. 6. In a video she posted to her Instagram page, she was seen dancing and twirling the sheer cape of the dress and one fan though she was looking a little thicker through the mid section. The rude person decided to go there and asked “U pregnant?” in the comments and the 39-year-old comedian hit back, “No, just getting fat.”

OMG, it is just so wrong for strangers to call out female stars for having a baby bump if they might have just eaten a sandwich. Tiffany appeared so joyful in the video, which she captioned “‘Living my best life in my @michaelkors dress!” and shouldn’t have to explain herself if she’s gained any weight. Fans immediately rallied to her side in the comments after her sad weight admission.

“@tiffanyhaddish no fat doll. You fine!” one person told her while another wrote “Voluptuous love, not fat. Gorgeous.” “@tiffanyhaddish You’re not getting fat. You look good,” another assured her. The person who originally asked the pregnancy question even tried to make amends by commenting “Am sorry i didn’t know its rude ….I was asking am really sorry” then apologizing directly to Tiffany for inadvertently fat-shaming her. “@tiffanyhaddish am really sorry if my question earlier was rude I didn’t mean to be …..U are one of my role model am really sorry,” the man wrote. 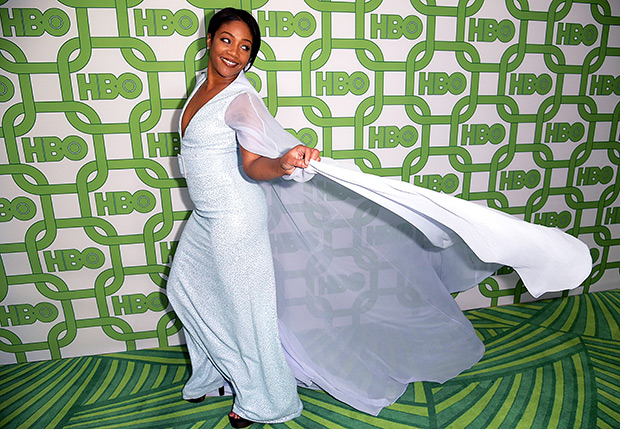 Living my best life in my @michaelkors dress! Thank you @luxurylaw @makeupbydionne @yvetteshelton100 and @netflix

Tiffany is just the latest celeb to have the horribly invasive question asked about them by total strangers if they have anything less than abs as tight as a drum. On Dec. 20, Kaley Cuoco clapped back at rude fans who asked if she was pregnant based on a flowy dress she was wearing. “I’m so sorry I bent over in a way to where my dress billowed in the wind and made you think this,” she wrote on her Instagram story, circling a few of the speculative comments. “Would you walk up to me and ask this straight to my face?” We sure hope not!