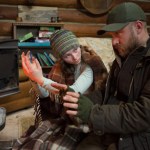 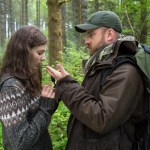 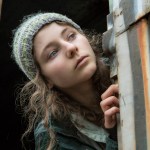 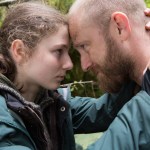 Imagine if you were a teenager living hidden in a wilderness park, totally off the grid for years with your dad, who is an army vet with PTSD?

That’s the scenario that director Debra Granik examines in her lovely new Oscar-contending film, Leave No Trace, which is based on an actual father and daughter who were discovered outside of Portland, Oregon in 2004. The real life pair were found by a jogger in Forest Park, a 5,200-acre public wood outside of the city, where they had lived for four years in a cave and tent-like structure.

Granik’s telling of the story, which also inspired a novel, “My Abandonment” by Peter Rock, revolves around Will (Ben Foster) as an army vet with PTSD, who cannot cope with the intrusions of the normal everyday world. He has taken his young daughter, Tom about 13 or 14, (Thomasin McKenzie), into a dense wilderness area near Portland, where they live a quiet and frugal life together. Will has taught Tom survival skills and has educated her so well with books that she is an intelligent, thoughtful and articulate young woman. She is also so loyal and devoted to her dad, that when the pair is found and he ultimately makes decisions that wrench her away from civilization again, she is willing to follow… to a point.

What makes the film and story so fascinating is the growing tension within Tom, as she is torn between what the outside world has to offer — school, friendships with both people her own age and older, and also animal companions — and her love for her father, who can only find peace in isolation. One of the things that makes Granik’s Oscar-contending film so refreshing is its pace. Set mostly in the towering, dense Oregonian forest, it lets its story and personalities carefully unfold. What a relief to NOT sit through a film with car chases, explosions and rapid fire scenes.

Leave No Trace moves the way Will and Tom do — mostly at hiking speed. Director Granik, who received four Academy Award nominations for 2011’s Winter’s Bone, which starred Jennifer Lawrence, tells HollywoodLife that she’s, “attracted to stories that have a robust role for a female protagonist.” And Tom, played by 17 year old newcomer McKenzie, from New Zealand, is mesmerizing. “Part of the story becomes about a girl’s emancipation. It’s absolutely about her having to understand herself well enough to expend that intense effort to decipher her father and understand him,” explains Granik. “It requires a very intense choice on her part… we had a very different coming of age… It’s not about first love, it’s not about staving off advances of somebody, it’s not about violation, it’s not about pregnancy, it’s not about getting knocked up… it’s a very specific coming of age.”

That coming of age for Tom, begins when the pair are discovered and are gently handled by social services including an empathetic social worker who arranges for the pair to move into a small, clean home stocked with groceries. Will is expected to work on a Christmas tree farm and Tom is set to go to school. However, Will becomes increasingly paranoid that they are being watched and that they will be separated. They run. Just like the real life father and daughter did who had been discovered outside of Portland. That pair were never seen again so no one knows their fate, but Granik has imagined what I think is a realistic journey for her pair in Leave No Trace.

After a near tragedy, Will and Tom are luckily rescued by a group of gentle souls, who also live a fairly secluded life. For Tom, it’s like heaven — near solitude, but proximity to other caring adults. She is befriended by a real life beekeeper and learns how to handle the bees for the film. “I felt like I had found a really animated, motivated collaborator who was going to jump into things,” Granik says of her young discovery. Thomasin, “was eager to and wanted to try the beekeeping and the beekeeper felt very comfortable with her and she learned it in increments.”

The film tries its hardest to understand Will’s psyche, who may for many people not be the most sympathetic character — after all he is raising his daughter in a cave, as divorced from civilization as can be, to the point that he endangers her life.

When Will and Tom come to their final crossroads, many filmgoers will have a hard time with Will’s decision, but Granik has a lot of sympathy for her war-damaged character. “What if, ‘the can’t’ is not because of moral or philosophical high ground but because the brain won’t perform it… that’s the really hard part about a psychiatric condition. A big part of PTSD is where the brain perceives danger and is unable to stay put,” she explains.

Now you will have to watch Leave No Trace for yourself and decide if you agree with the decisions that Will and Tom make. It’s available to see on iTunes, Prime Video, Google Play and more!