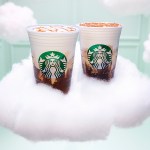 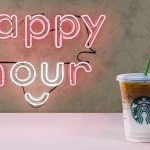 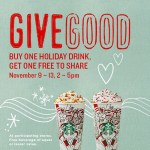 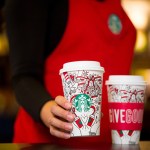 It’s the most wonderful time of the year! — Holiday drinks at Starbucks are back, and the coffee giant is stepping its game up! Here’s everything to know: When? What’s new? And, SO much more!

Starbucks is the gift that keeps on giving … year after year! The coffee giant has released its first advertisement for its annual holiday drinks! — “Tomorrow only, November 2 get a free reusable red cup with the purchase of any holiday beverage,” Starbucks posted on its Instagram and Twitter accounts. The offer is available in Starbucks stores in the United States and Canada. If customers use the cup between Saturday and January 7 to buy a 16-ounce holiday beverage after 2 PM, they save 50 cents on their order.

The signature red cup got a makeover since this is the first time ever, Starbucks decided to make the red cup reusable. Now, while their signature red cup is only free on November 2, that day also marks the official start of Starbucks’ holiday beverages! Starting Friday, November 2, the company will begin offering six holiday beverages — Peppermint Mocha, Toasted White Chocolate Mocha, Caramel Brulee Latte, Chesnut Praline Latte, Gingerbread Latte and Egg Nog Latte. The drinks will be available hot, iced or as a blended Frappuccino.

If you’re Starbucks crazed, like us, then you’ll know that their holiday drinks are returning a bit earlier this year. In fact, Chief Operating Officer Rosalind Brewer said it’s a week to 10 days earlier than previous years! Store merchandise will feature an assortment of gifts under $20, with many items exclusive to the Starbucks brand, Brewer added.

Introducing the limited-edition #Reusable #RedCup! Tomorrow (Nov. 2), get yours for free with the purchase of any holiday drink, and celebrate all season long. ✨

(US + Canada, at participating stores while supplies last.) pic.twitter.com/CucF1ksKNH

As for what’s new? — Starbucks will debut a seventh beverage later in the season. In addition, the company will offer special holiday pastries, such as a sugar plum cheese danish and chocolate swirl brioche. Those treats join returning favorite, the Cranberry Bliss Bar.

And, where holiday drinks are available, each store will be decked out for holidays! “Stores will transform with festive and warm trim and décor, Starbucks baristas will proudly wear their red aprons, customers can sip their favorite seasonal beverages from holiday cups, shop for Christmas Blend whole bean coffees and beautiful, giftable Starbucks Cards and merchandise,” Starbucks wrote on its official website.

Brewer admitted that the company really listened to customers this season when they were creating their holiday plans. And, this season, it’s all about less merchandise, a reusable red cup and an earlier release of its holiday cups and beverages. “We have learned a lot,” she told CNBC of evaluating the last year. “Less is more.”

In addition, Starbucks’ shift to more reusable cups is part of a series of environmentally friendly promises the company has made. They plan to move to eliminate single-use plastic straws globally by 2020.