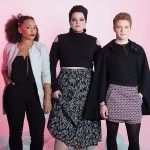 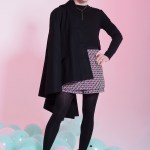 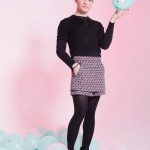 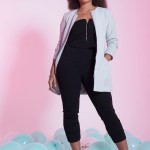 The Heathers are BACK. After quite the journey, the ‘Heathers’ TV series will air in a 5-night binge-a-thon from Oct. 25 to 29. HollywoodLife spoke EXCLUSIVELY with the three Heathers about the reimagining. Plus, check out our exclusive photo shoot!

Come on, you didn’t think the Heathers were going to stay away, did you? The TV reboot of the 1988 cult classic will shown over the course of 5 days starting Oct. 25. HollywoodLife talked EXCLUSIVELY with the three Heathers — Melanie Field, Brendan Scannell, and Jasmine Mathews — about the all-new series. Since this is a 9-episode series, the cast revealed that the show will peel back the layers on all of the characters.

“The movie really establishes the baseline, and we were able to expand so much and really get into the psychology of why they do what they do and what they’re after,” Melanie told HollywoodLife. “I think it’s really interesting because we’ve created these characters that, on the surface, you might think are really unlikable because of what they do, but they more they reveal about them the more people will relate to them and feel really conflicted about their behaviors.”

While there was initial backlash over the Heathers reboot, Brendan noted that the movie is just a “jumping off point” for the series. “We’re also able to go into new and different directions,” Brendan said. “The source material is a jumping off point. The pilot follows the movie somewhat, but then from there we go in completely new directions that I think are going to be exciting, whether you’re a fan of the movie or if you’re a new person who is discovering Heathers.”

Jasmine really got to explore the inner workings of Heather McNamara and said she was “interested in why she was a bully, and I think that’s the most fascinating thing about this. Each person has their reasons behind who they are and why they’re doing what they’re doing, but it’s all different. Vulnerable is probably the best word I’d use for Heather McNamara.” Jasmine also opened up and admitted that she had to look back to her past in tackling the role of Heather McNamara. “I had a similar experience to Heather McNamara in high school, and that’s why I was so drawn to the original when I was younger,” she continued “I couldn’t watch it so much because it was too hard for me to watch, so getting to perform this role I really had to dig into my own past and my history and kind of reopen those traumas. What high school kids are going through, people tend to play it off, but this is real. These are real experiences. You can’t write that off.”

Brendan added: “High school in general is just, like, a microcosm for what’s happening in our society, and our show is sort of exploring all of those issues in this no-holds-barred type of way. This is a fictional universe where sh*t goes down and it’s funny and entertaining, but it’s all really heavy satire about the issues of identity that are happening in our culture or the power dynamics or sexuality. It was fun to go to work every day and just being like, ‘What are we exploring today?’ And not in an after school special way.” The 5-night binge-a-thon begins on Oct. 25 at 10 p.m. on Paramount Network. All 9 episodes of the show are currently available to stream on ParamountNetwork.com and the app.