The Carolina Panthers may get their star tight end back much sooner than expected! Despite Greg Olsen suffering a foot injury (which occured in the first quarter of the opener against the Cowboys), he’s been able to avoid a prolonged recovery process. Why? — As you may know, Olsen suffered a similar injury, a fracture on the same foot, last year. When that occurred, he had a screw surgically implanted to keep the bone from completely breaking again, therefore saving him from a more serious injury this time around.

Recent reports have said Olsen is ahead of the curve in terms of his recovery, which he explains is because he didn’t have to undergo surgery for a second time. “Well last year, when I broke it you know I had to go through surgery, and have a screw inserted through the bone that broke, to stabilize it and then allow the bone to kind of heal around it,” he tells HollywoodLife.com EXCLUSIVELY while hanging out with his friends from Walgreen‘s (more info below). “So, any time you have surgery, anytime you have that sort of trauma of a bone completely breaking, it takes a little while for all that healing to really take root. You know, this year because that screw was already implanted, that bone was held together a little bit, much better than it was last year. I did not have to have the trauma of a surgery, didn’t have to have that recovery on top of the injury.”

“So, all those things kind of add up and once we’re able to get the swelling and inflammation, and the soreness and the pain out, you know it’s just the matter of trying to do what you can to stimulate some more bone healing, more bone growth around that screw, just try to get as much stability as possible. I’ll let you know that’s a lot easier said than done.”

While Olsen’s been out since week one of the NFL season, it’s looking as thought he will not have to miss nine games like he did last year. In fact, he tells us that his condition is “much better” than it was last year. “I’m doing well. It’s obviously been a frustrating little spurt here, kind of to re-injure, similarly to what I had last year that required me to miss so much time thinking it was behind me, thinking that I’ve fully recovered from that, having no limitations, no problems,” he says.

He explains: “Then the first quarter, of the first game, after all that work, after all of off season, to you know just take one false move and kind of have a major setback is obviously disappointing to say the least. But one, I’m confident that I can bounce back from it, and two I’m confident I can look back and say you know it’s a learning process and something that made me better, made me stronger and just trying to keep my hopes on that.”

Although there is no exact time table for his return, Olsen tells us he’s confident it will be soon. — “I think so, I think that’s fair. I think it’s really hard for everybody to pin-point an exact return date,” he admits. “But, I think you know generally speaking, I think yeah, I think it’s fair to say it’s going to be sooner rather than later. We’re talking about weeks not months, I guess is probably our hope and that’s what we’re kind of remaining optimistic about, and until something proves otherwise that’s the mindset we’re going to move forward with.”

Related: NFL Star Brandon Marshall’s Kids: All About His 3 Children

Learn more about Greg’s partnership with Walgreen’s, below! 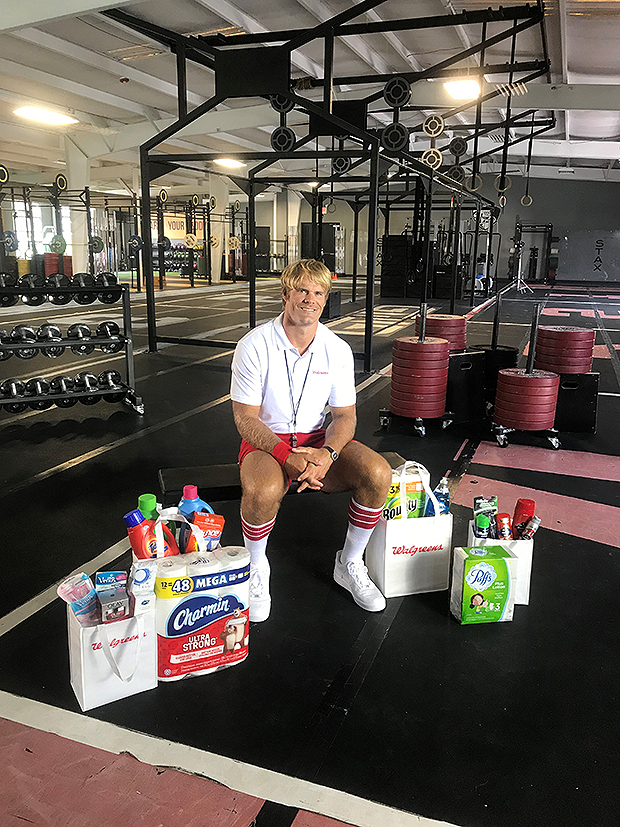 Greg Olsen partners with Walgreens/P&G to help his wife, Kara manage the household.  Greg has become “Coach BOGO50,” making sure families throughout the country take advantage of the buy-one get-one 50% off of select P&G products at Walgreens in October. 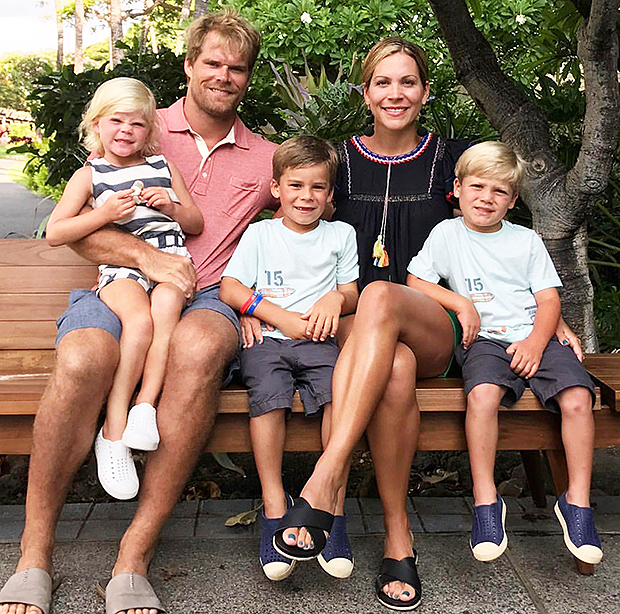 Greg Olsen, his wife Kara and their three children.

Why P&G and Walgreen’s? — Tell us all about the partnership!

How has Walgreens’s/P&G changed your household routine from getting the kids ready, to your hectic football schedule?

I mean it’s kind of funny the more you dive into it you don’t realize almost everything we use is a P&G product. A few of my favorite BOGO50 combinations at Walgreens include stocking up on Gillette Mach3 Disposable Razors and Old Spice. I also buy other essentials like Bounty paper towels, Charmin toilet paper, especially with three kids at home. My wife Kara picks up her Olay Whips at Walgreens. She also likes getting her personal care essentials like Secret Deodorant, Venus shave products, and Olay Body wash.

Has this helped balance life a bit more? Has having more time with your kids/wife, made your life more organized?

Yeah, I mean I think a lot of times we take it for granted having access to the product we use every day just being able to you open the closet, every time you open your cupboard under your sink – we take it for granted. It’s been nice to take a step back and see how much a part of our lives P&G products have become. For us, we stock up before the NFL season begins, but a family of five there is always a need to replenish the stock! And this BOGO50 program can really help families stock up on their essentials in the month of October as well.

Tell us more about your foundation!

Yeah well obviously, heart disease and more specifically congenital heart defects, obviously has made huge impact in my life, and my wife’s life. Our son, our youngest boy, one of our 3 children, was born in 2012 with a very serious complex heart defect. It required him to be born with only half of a functioning heart. In the subsequent two years following birth he underwent three open heart surgeries. He had a pacemaker implanted and he has since lived with that. Since then, we obviously know all too well just how scary and how crazy that world of congenital heart disease and heart disease in general can be. It’s made a huge impact on our family, and kind of changed how we view things and changed how we prioritize things. You know, we just feel very fortunate, you know he’s about to turn six here in a couple of weeks. Obviously we don’t know what his future holds, but his past couple of years have been no different than his twin sister or older brother, and for that we’re very grateful.

Have you given thought to post-NFL careers? — Will you build on his previous experience as a broadcaster?

I’ve been very lucky, I can be the first to say I’ve been very fortunate to have so much access to some pretty cool opportunities over the past few years. So a lot of those have been in the broadcast realm. It’s something I feel very fortunate that I can, and you know from serving on the countdown desk on ESPN, on Super Bowl Sunday last year to being only one of only a couple NFL players to ever call a broadcast for an NFL game while still as an active player. So on and so forth. If the broadcasting thing did work out, and it was an opportunity that my family, that my wife and I thought would fit with what our personal aspirations are, both as a family and as professionally, post career, it’s something we would strongly consider. It’s something we would decide as a family. I’ve given a lot to football over the last 20 years of my life so this next decision I’m sure I’ll have a lot more input. Not always just about what works for me anymore.