At 80 years old, Jane Fonda looks ageless, but even she admits that her look is not all due to good genes and Pilates. “I’m glad I look good for my age, but I’ve had plastic surgery,” Jane says in Jane Fonda in Five Acts, a new HBO documentary about her life, according to PEOPLE magazine. “I’m not going to lie about that. I got tired of looking tired when I wasn’t.” Along with this admission, Jane also expresses a little regret of getting so much work done.

“On one level, I hate the fact that I’ve had the need to alter myself physically to feel that I’m OK,” she says, casually dragging the unfair beauty standards enforced on women. “I wish I wasn’t like that. I love older faces. I love lived-in faces. I loved Vanessa Redgrave’s face. I wish I was braver. But I am what I am.”

Jane expressed similar regret and sadness in 2015. “I’m two years older than my dad [Henry Fonda] was when he died,” a then 77-year-old Jane told The Guardian. “Katharine Hepburn was three years younger than I am now when she made that movie [On Golden Pond]. People looked older back then. I wish I were brave enough to not do plastic surgery but I think I bought myself a decade.”

“The danger with surgery is you say: ‘Oh this is good, let me do more.’ It can be an addiction,” Jane added. “Thirty percent of women were sexually abused when they were young. And a woman who has been sexually abused will have a tendency to go too far. When you’re young it can be [self harm] and when you’re older it can be plastic surgery. When I see a woman who’s made her face a mask I say: ‘I bet, I bet.’ “ 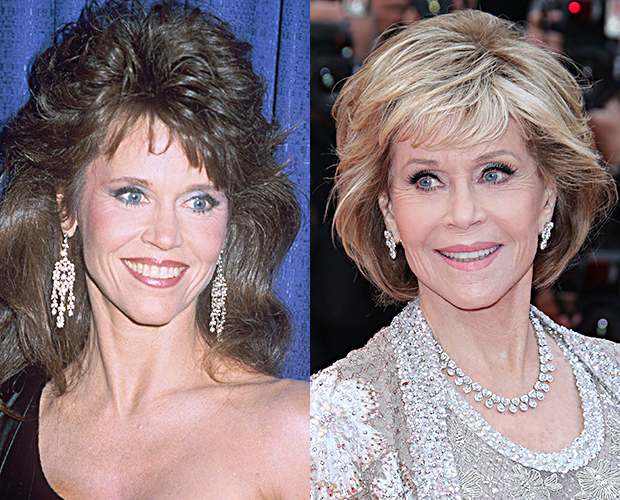 So, will Megyn Kelly, 47, have something to say about this Jane’s “regret?” Remember how Megyn brought up Jane’s surgery during a September 2017 episode of Megyn Kelly Today? Jane’s furious response – “We really want to talk about that now?” – cranked the awkwardness up through the roof, and the feud continued long after the episode aired. Jane slammed Megyn in an interview, saying that it was the “wrong time” to ask that question (she and Robert Redford, 82, were on the show to promote their movie, Out Souls At Night) and Megyn clapped back at Jane by saying she was in no position to be “morally indignant.”