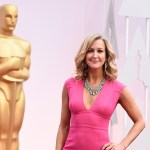 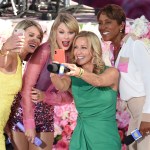 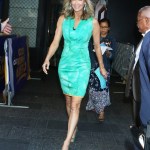 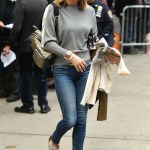 Congratulations are in order for Lara Spencer. The ‘Good Morning America’ co-host looked stunning on Sept. 1 as her teenage son, Duff Haffenreffer walked her down the aisle.

Congrats to Lara Spencer. The 49-year-old Good Morning America co-host looked a vision in white as she walked down the aisle on Sept. 1 to marry her sweetheart Rick McVey, 58. The beautiful blonde wore a gorgeous, sheer lace dress with flowers, showing off her slimline figure. She beamed as her 16-year-old son from her first marriage, Duff Haffenreffer, walked her down the aisle to meet her beau during the Vail, Colorado ceremony.

PEOPLE magazine editor Jess Cagle shared a clip of the wedding on Instagram showing the beaming bride with her veil trailing behind her. The beautiful wedding took place just eight months after Lara and Rick got engaged in January 2018. It’s the second marriage for Lara who split from her first husband David Haffenreffer in 2015 after 15 years as husband and wife. The two are still friendly. In addition to their son Duff, they also have a 14-year-old daughter, Katharine. Rick has three daughters. This marriage will also be his second.

The entrepreneur and the TV host started dating in 2017, according to reports. A source told Us Weekly at the time, “She’s known him for years and they started dating around a year ago.” The happy couple are obviously loved up as Lara’s Instagram is full of beaming pics taken on their trips around the world. On July 13 the blonde posted a photo of them posing with friends in the sea during a vacation in Greece.

And, of course, who could forget that romantic selfie they took at the top of the Eiffel Tower in July 2017. Joking about their attempts to get the perfect pic, Lara wrote on Instagram, “The first 3 attempts at this selfie had the #eiffeltower coming out of my head like a single antenna. #smallvictory #paris.” Let’s hope they had better luck with their wedding photos!