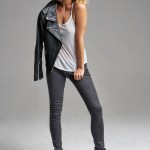 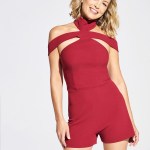 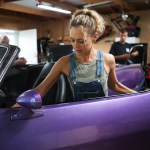 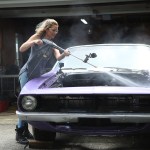 Heather Storm isn’t afraid to get her hands dirty! The TV host of ‘Garage Squad’ prepares to kick off another inspiring season & talks to HollywoodLife about her love of cars & travel.

This badass blonde is not only a star behind the wheel, but also under the hood! Heather Storm returns to TV for another season as the host of Velocity’s Garage Squad! Kicking off it’s fifth season tonight, Aug. 29, at 9 PM ET, Heather is joined by world champion driver Bruno Massel and lead mechanic Joe Zolper to literally pimp the rides of some amateur car owners. “There’s so many different variables, and pieces, and problem solving that goes in to fixing these cars,” Heather explained to HollywoodLife.com in an EXCLUSIVE interview. “To be able to work with a group of people, and problem solve, and then see the end result in this incredible transformation is empowering in and of itself.” This season, Heather teased, we’ll see the gang not only help people who aren’t able to get their vintage cars ready for a joyride, but also car owners who may have endured a tragic event, and need a pick-me-up.

“Sometimes we’re helping these people through processes, or traumatic events that have happened in their life where the car was a symbol of that. Once they’re able to get it up and going, they’re able to move forward a little bit,” the “Drive Yourself Local” host revealed. “It’s a whole process. It’s not just fixing the car, but getting to know the people, and helping them through a transition period that they’re going through, too, which is really cool.” In the first episode of the season, Heather, Bruno and Joe find themselves traveling to answer the prayers of Oswego pastor, Rich Wooten, a man who gives so much to his community and expects nothing in return. The trio goes to help him reboot his 1974 Ford Bronco that he had always wanted to fix up, but put it aside for years. “Pastor Rich was such a personable guy. He was just really fun to work with in general,” Heather said ahead of the premiere episode. “What was fun about this episode, was that he clearly doesn’t do anything for himself. He’s just a giver, no matter what type of work. He traveled all over the world doing missions, and helping people out, and that just so wonderful. It’s really nice to be able to give back to somebody, and that excitement is contagious.”

Heather, a proud owner of a ’65 Mustang, herself, spends her “off” time driving cross-country, giving her followers what she calls “slices of local America.” “What I love about meeting people in small towns, is that people are people no matter where you’re from,” she explained. “There’s nice people and there’s not so nice people. You meet the nice people and you have a little more faith in humanity just checking out there.” You can follow her adventures on her website by clicking here! Be sure to tune in tonight, Aug. 29th, and every Wednesday at 9 PM, to Garage Squad on Velocity!